Australian Open 2018 begins on Monday, 14th January 2019 with the first round matches with both mens and women singles events. The tournament will be played through 14th January to 27th January 2019. Every days play start at around 10:00 am Australian time / midnight uk time and there will be two sessions every day, second session starting at 05:00 pm local time. We will have live links of Australian Open championship right here just before the start of every days play.

Australian Open 2019 will get underway on Monday, 14th January 2019 with the first round matches. It will be the first grand slam of the year and will be played through 15days till 27th January when mens final take place. Australian Open authorities has confirmed another 10% increase in the total prize money and Aussie Open is rapidly becoming one of the most watched tennis events of the year largely down to being the first major tournament of the year in tennis.

British EuroSport will have live coverage of most of the mens and women singles matches in the Untied Kingdom. While BBC will have daily highlight show after the days play. However if you don’t have access to live coverage you can always tune in here for live streaming links which are usually available everyday before the start of play.

Gates open at 10.00 am in the morning and play will start at 11:00 AM local Australian time in Rod Lever, Margaret Court and other courts while the night session starts at around 5:00 PM local time and night matches will only take place in Rod Lever Arena and Margaret Arena. here is a complete schedule of the tournament.

Novak Djokovic defeated Andy Murray in the final of 2016 Australian Open to win his 6th title down under while 11th overall in his career. Andy Murray was in the match throughout the game but that psychological effect Djokovic has over him prevailed in the end.

Djokovic won the match by 6-1 7-5 7-6(3) scoreline and completed his sixth title win in Australian open. Andy Murray has now lost all four finals played against Djokovic in Aussie open.

Angelique Kerber defeated Serena Williams in three sets to win the 2016 Australia Open women’s title. Sarena was widely tipped to win her 22nd title to equal Steffi Graf’s modern era record but she fell short with [6-4],[3-6],[6-4] in three set defeat in the hands of Kerber. 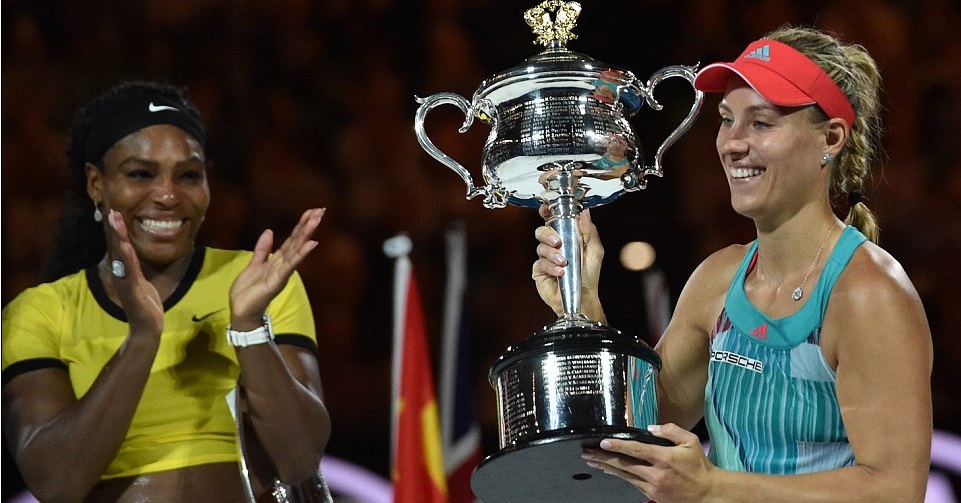 Kerber was right in the game from the word go as she put pressure on Sarena throughout the game. Williams seemed to be overrawd by the surprisingly competitive Kerber who forced so many errors from Sareena. First set belonged to Kerber who clearly had Sarena in shock but when Sarena Williams raced to 4-1 in second set it looked like the normal service is about to resume. But even after losing second set, Kerber cameback harder in third to win the match and her first ever grand slam title.