As we move closer to the biggest fight of this century between undefeated world champion is five weight classes Floyd Mayweather and 8 division champions Manny Pacquiao its not easy to aviod the discussion of the greatest boxers of all times. But since Mayweather is carrying his undefeated record into the fight we take a look at some of the greatest undefeated boxers to have ever graced the sport of boxing. 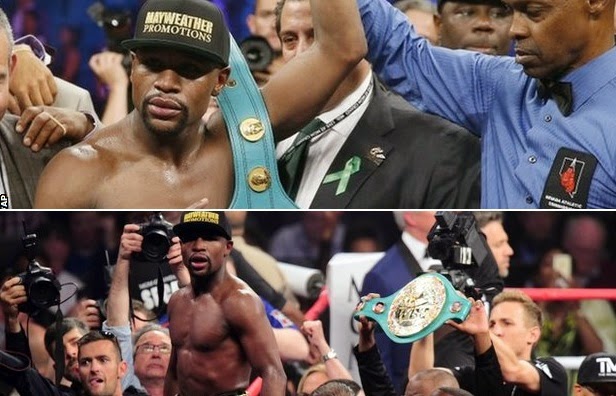 Floyd “money” Mayweather, started his professional career in 1996 and by the time he faces Manny Pacquiao I might have to remove his name from this list (Highly unlikely though). But as for now he is easily one of the greatest boxer to have ever lived, he himself went notch ahead and call himself “the best ever” (which can be argued of course) but there is no denying the impact Mayweather’s career has had in recent boxing history. He has fought 20 world champions and came up triumph against each and every one of them

Update: Mayweather defeated Pacquiao unanimously in the fight which was billed as “Fight of the century”. Mayweather dominated in his own style without given much away. Pacquiao threw more punches but could not land as Mayweather was at his best again. If there was any doubt about the ability he possesses should be erased and he is one of the greatest boxer to have ever lived.

Rocky Marciano’s career was short but highly successful, and fought some of the finest boxers including the great Joe Louis who came out from retirement to fight Rocky.

Uruguaying boxer Ricardo Lopez made his professional debut in 1985 in the strawweight division and whole his career he switched between strawweight and flyweight. During his career he fought some of the finest fighters from his division and that too in their prime. The fights on his resume are so impressive that he is unanimasouly considered the greatest Stawweight champion of all times. He hold the stawweight world title from 1990 to 1999 and than went on to become No.1 junior flyweight plus he was always in the pound of pound ranking from 1993 to 2001. He had a perfect record until Rosendo Alvarez earned a draw against him but in the very next fight which was the rematch he defeated Rosendo Alvarez to kept his WBA & WBC World minimumweight titles.

Hailed from Wales, Calzaghe made his debut back in 1993 made a name for himself fighting in United Kingdom and europe for best part of 15 years. He won WBO World super middleweight title by defeated British legend Chris Eubank in 1995 and managed to hold on to that belt till the end of the his career. It took him 15 years after his debut to fight in United States and when he did he defeated Roy Jones Jr and Bernard Hopkins in his last two fights of the career but most importantly finished his grand career without a defeat.

Like him or not he will go down as one of the greatest super middleweight boxers of all times, could have been the best had he not delayed his decision to fight in USA.

Venezuela boxer Edwin Valero started his boxing career back in 2002 in the lightweight division and he quickly made a name for himself. The calibre of the fight he was involved in was not world class but the way he ended the fights will always be remember. He is the only boxer in history to have a perfect knockout ratio having fight more than 25 times. He was suppose to fight Manny Pacquiao in near future when he killed himself along with his wife leaving behind and unbeaten record.

A short but very successfull professional boxing career put Hungary’s Laszlo Papp in the bracket of greatest undefeated boxers. He turned professional quite late in his career as he was busy winning Olympic gold medals (three of them) in the armature boxing. His failure to live up to his full potentional was somehow halted by Hungary government who denied him permission to travel abroad. His most notable victory came against “Ralph Tiger Jones”  who defeated or should I say upset victory over legendary Sugar Ray Robinson. Had Papp able to fly without problems he was in line for them middleweight title fight which never materialized. He finished his career unbeaten at the age of 38.

Jimmy Barry (59 win, 10 draws) & Packey McFarland: Both of these boxers fought in late 1800’s or early 1900’s and their claim for being unbeaten is disputed, having said that they Jim Barry recorded 59 win out of 69 fights with 10 ending in draw. This was the era when sometime newspaper would judge the fight. Jimmy Barry started his career in 1891 and fought 69 times in next 9 years. Some other names should be mentioned as well who might not be greatest of their era but were decent boxers with unbeaten records (google their names for more info)