The biggest fight of the year has been signed, confirmed and announced by both Jay Z’s Roc Nation who promote Cotto and Canelo’s Golden Boy promotions. The fight is set to take place on 21st November 2015 at Mandalay Bay, Las Vegas and it will be a HBO PPV event. The first official press conference will take place on wednesday, 19th August 2015 and during the conference all details of PPV prices and tickets will be announced. 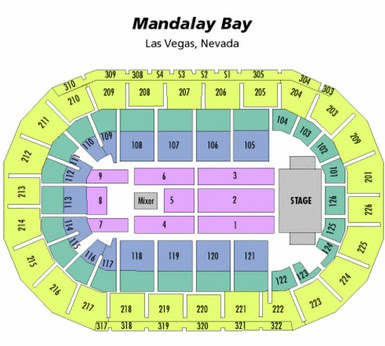 Cotto vs Canelo Tickets: Mandalay Bay Arena has a capacity of around 12,000 and we can safely assume that 12,000 tickets will be sold within a day if not hours of going for sale.

Tickets prices starts from $750 to $3000 for ringside and your best chances of buying Cotto-Canelo tickets is through secondary market.

Tickets are not officially available yet but some of the renowned secondary markets has already put up tickets of Cott-Canelo fight available through different channels. Although they dont have tickets yet but they do have arrangement’s with promotions to get fair share of tickets which they sell at over the top prices. We would advice you to wait till the officiall announced of the fight and tickets has been made next week with first press conference.

ticketnetwork(dot)com are selling tickets for Cotto-Canelo with over the top prices. We advise you to wait for official announcement about tickets for this fight.

Above image will give your good idea about how much money you would need to buy tickets for Canelo-Cotto fight. Starting from $860 to $2700. Again these prices are from secondary market/black market. Official channels will sell tickets at base price but there will be hardly 1000 or max 2000 tickets to be made available for general public.

First Official Cotto-Canelo Press Conference:  Officiall announcment of the fight will be made on 19th august 2015 with all details about PPV, tickets, venue and broadcasting coverage to be revealed to media. We will update the tickets details right here after the press conference.