David Haye has confirmed his return to the ring as he announced Mark De Mori as his opponent for 16th January 2016 fight which will take place at O2 Arena in London. Here is all you need to know about the fight and pretty much unknown fighter Mark de Mori.

David Haye is all set for a return to the ring as he confirmed his comeback fight against Croatian-Australia boxing Mark de Mori which will take place at the O2 Arena in London on 16th January 2016. This will be the first time you will see David Haye back in the ring after three and half years and he already set his sights on bigger fighters later on with the likes of Anthony Joshua and winner of Wladimir Klistchko/Fury fight. 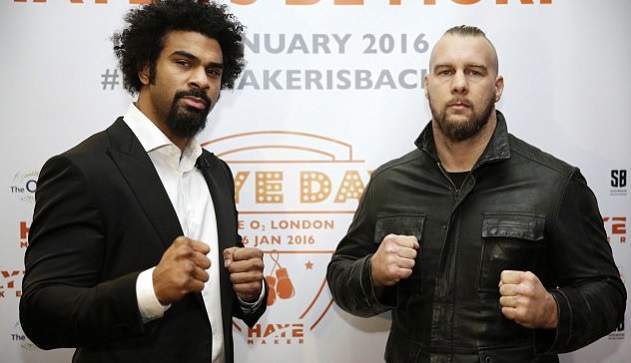 The last fight Haye was involved in was back in July 2012 when he defeated Dereck Chisora in 5th round knockout. This fight against little know “Mark de Mori” is pretty much an tune up to bigger fights. De Mori is not much known outside Australia but he do bring size and knock out power but David Haye is too skill full and on a different level to get any trouble in the proposed bout early next year.

David Haye will be trained by Shane McGuigan and Haye is confident that his 3 year layoff will get him more motivated and fresh going into this comeback fight. De Mori has a very good record on paper but there is no one on his CV who you would call world class. Having said that when two heavyweights go in the ring the fight can be won and lost with a punch and De Mori do pack some power.

We will keep you updated with more about this fight and what kind of shape David Haye is in currently going into the fight. We will also be placing live streaming links on the night of the fight plus replay video highlights.