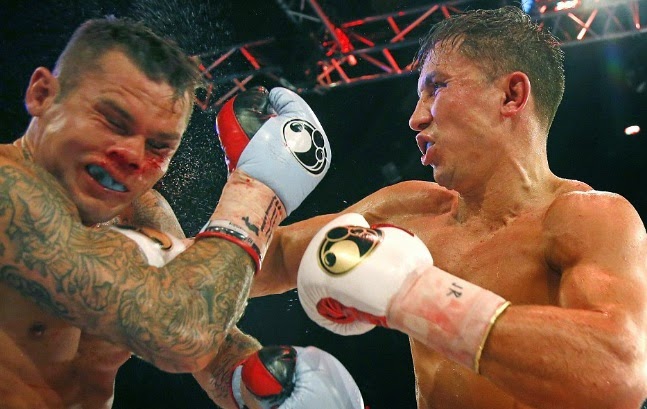 Golovkin won the fight against Martin Murray in 11th round stoppage for only the second time in his career.

Golovkin was made to work hard for a win as Martin Murray showed great courage and determination to take the walterweight champions GGG to 11th round for only the second time in his career. Murray was never in charge of the fight but he kept going and did not go down easilty. Watch the full fight replay video below which is placed from youtube and we might update a better version later in the night.

So the first big fight of the year will take place in Monaco this saturday night when Gennady Golovkin will take on Martin Murray in what should be a classic of a bout. Golovkin has taken middleweight division by strom and there are very few fighters who wants to share the ring against probably the most feared boxer at the moment and in terms of odds he is 1/10 favourite against British boxer Martin Murrey who will have his third shot at the world championship title previously he lost against Sergio Martinez in 2014 in the title fight and could only get a draw against Felix Sturm in Germany back in 2011 but he wont be pushover by any means as the odds suggest Murray will bring his pretty impressive record of (29-1-1, 12 KOs) against Golovkin who is yet to lose a fight. So how can you see this fight live ?

We will place a featured stream of HBO coverage at around 08:00 GMT (Local Monaco time) and we will also place couple of alternative links which will have UK coverage and hopefull in some other language as well. All you need to do is to bookmark this page and comeback before the fight to get free live streaming. Check out the times and channels below.

HBO will be broadcasting this fight (only the main event) live in United States from Salle des Étoiles in Monte Carlo at around 5:45 p.m. ET while “Channel 5” will broadcast the fight to United Kingdom viewers at around 22:00 GMT. But if you dont have access to the above channels or you are in a country where no coverage is available you can always use totalsportek for live streaming of free boxing events.

This is a massive fight for the fans and we will bring you the live action of the fight right here plus the full fight replay video which will be available after the fight is over. There are couple of decent under-card fights as well but HBO will only be broadcasting the main event (Golovkin vs Murray) but we might get you live streams for under card fights as well, you can check back on 21st February 2015 for more updates on how and when the streams will be available.