Kell Brook defeated Jo Jo dans in what was a terrible mismatch where Brook claimed an easy win with a fourth round stoppage and retain his IBF World welterweight title. Dan was knocked down twice in the round 1 and round 4 and his corner thrown in the towel. The win shows that Kell Brook has made a full recovery from the stabbing he suffered late last year and will be on course to get a big fight later in the year. 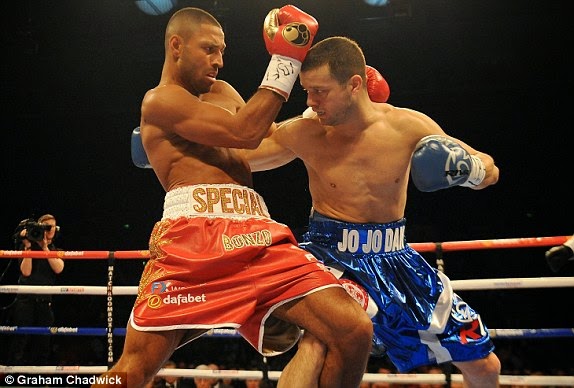 British Boxer Kell Brook will return to the ring against Jo Jo Dan defending his world title, this will be his first return to the ring after suffering horrific knife assault which injured his leg a few months back. He is over whelming favourite for this fight and should win it easily to book another big fight later in the year against either Amir Khan or it might actually be against winner of Floyd Mayweather vs Manny pacquiao.

Brook has a unbeaten record so far with 33 wins out of 33 fights including 22 knockouts and the fight against Jo Jo Dan is a tune up fight for him to get ready for bigger things later in the year. Jo Jo Dan is Romanian born fighter who has been fighting in canada for long time and has a record of 34-2 to his name and he will be hoping that Kell Brook won’t be at his best and he can pull off a shock win. On the undercard of the main event we will have Gavin McDonnell vs Oleksandr Yegorov for the European super bantamweight title which was vacated earlier.

Once the fight is over we will place the full fight replay video here which will be available couple of hours after the fight, we will keep updating this page with live commentary and results throughout the night.