Chris Algieri made life very difficult for Amir Khan with some quality power shots but in the end Khan had little too much for him with his speed and movement. A unanimous decision with all three judges scoring 117-111 for Khan. 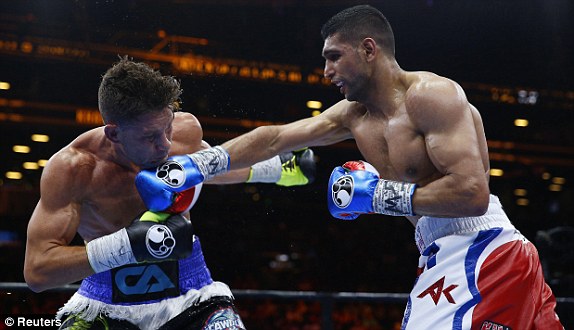 Amir Khan knew he was in the fight straight from the round 1 when Algieri relentlessly moved forward and put Khan under pressure. Khans hand speed was always going to be factor and winning a points decision against him is pretty difficult so Chris Algieri seemed to had his tactics spot on for the fight.

He caught Khan almost in every round with good power shots some of them really sting him up but Khans experience and speed got him through the difficult rounds. All three judges scored the fight same with 117-111 to Amir Khan.

Amir Khan will be taking on Chris Algieri on Spike TV’s Premier Boxing Championship night come this friday night 29th May 2015. Amir Khan need to make a statement with impressive win against Algieri to have a decent chance of fighting Mayweather later in the year but Chris Algieri is no pushover and he will be eager to get back to winning ways after his november 2014 defeat in the hands of Manny Pacquiao. Spike TV will have the broadcast of the fight in United States as part of their “Premier Boxing Championship” program while BoxNation will broadcast the fight live in United Kingdom. Amir Khan’s native country Pakistan will have the coverage on Nation tv “PTV Sports”.

But if you dont have any of the channels listed above you can always tune in to watch the fight live at totalSPORTEK as we will be place free live streaming of the fight right on this page come 29 May. The fight is suppose to start at around 09:00 PM ET (29 May) and 03:00 AM UK – 07:00 AM Pakistan time (30 May, saturday morning). We will have the live streaming with BoxNation coverage 1 hour before the start of the fight. Couple of alternative streaming links will also be provided here incase the featured stream goes down.

There will be another undercard fight between BRYAN VASQUEZ and JAVIER FORTUNA for the vacant WBA SUPER-FEATHERWEIGHT CHAMPIONSHIP. This undercard fight might turn out to be one to look forward too with too great prospect going head to head for the full WBA world title in featherweight class.

Amir Khan needs to up his game against Algieri and score a dominant win over him just like Manny Pacquiao did last november to stand a chance of getting a fight against Mayweather or event Manny Pacquiao later in the year of early 2016. Since his two back to back defeats against Danny Garcia and Lamont Peterson several years ago, Amir Khan has been on the road of recovery for quite some time now and has not fought a top notch fighter but still keep mentioning his name alongside the likes of Mayweather and Pacquiao which kind of annoy boxing fans but this is his chance to get and impressive win and stake a claim for fighting Mayweather and of course the bigger payday.