Canelo Alvarez has defeated Amir Khan with a devastating 6th round knockout in their Saturday night bout in T-mobile arena in Las Vegas. Amir Khan started stronger and pretty much out-boxed Canelo in first three rounds but as soon as Canelo go into the fight it was just the matter of time before he lands a big one. 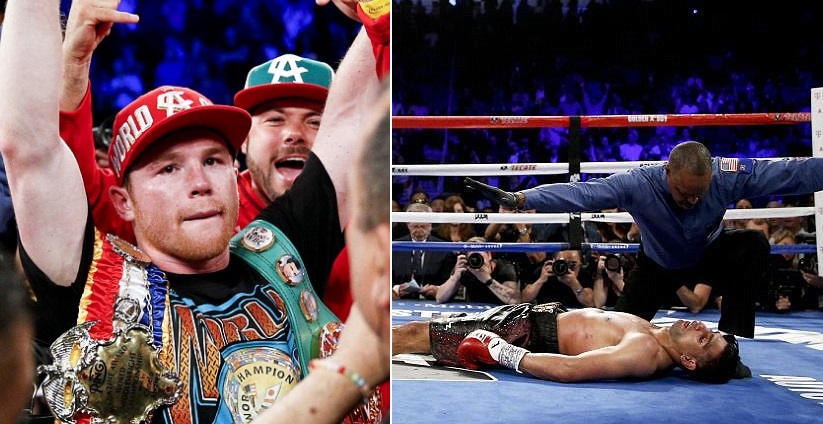 Canelo caught Khan with a decent shot in round 5 and wobbled him a bit but Khan came out firing in round 6 and threw combinations but Canelo caught him with a powerfull right hand which sent Amir Khan crashing down the canvas leaving referee Kenny Bayless no other choice but to finish the fight.

Although Canelo was heavy favourite before the fight, Khan’s impressive first three rounds had put the belief in his supporters and boxing fans in general. But in his usual casual and care free style he kept attacking and left himself vulnerable which was recipie of disaster as Canelo was looking for that big right and he found just the right moment and unleashed a power bomb which would knockout a horse.

Canelo came in alot heavier than on friday’s weigh-in and Khan camp would have anticipated it. Khan had his strategy spot on in the first few rounds but his tendancy to get into brawls let him down and got caught with a massive right hand from Canelo.

Its hard to see where Amir Khan goes from here and in the post fight interview he was still dazeled by the knockout and the pictures of him lying unconscious in the ring will only make it worse.

Us viewers will have to splash out around $59.95 to watch the fight on HBO PPV while UK boxing fans can subscribe to BoxNation channel for around £12 per month (no-fixed contract) to watch the fight. HBO coverage of Khan-Canelo will begin at around 09:00 p.m ET and there are number of other quality fights on the undercard including Mauricio Herrera vs Frankie Gomez and David Lemieux vs Glen Tapia followed by the main-event of Khan vs Canelo which will be starting at around midnight eastern time.

It will be broadcasted live via HBO youtube channel. We will be placing the live stream of Khan vs Canelo official weigh-in right here on this page at around 06:00 p.m ET / 10:00 p.m uk time on friday night.

HBO PPV coverage begins at around 09:00 p.m ET with the preliminary fights while United Kingdom viewers can tune into BoxNation (Sky channel 437) at around 01:30 a.m (Sunday) to catch the live action. Boxing fans in Pakistan can watch the main-event of Khan-Canelo at around 09:00 a.m (sunday) at PTV Sports. There are three undercard fights and of course the main-event and here is how the fight night schedule looks like.