Wladimir Klitschko took on american boxer Bryan Jennings in the world heavyweight championship bout in Madison Square Garden, New York. Klitschko was fighting in america for the first time in last 7 years and Bryant Jennings being american came with huge home support which Klitschko is not use to as he has been fighting in Germany consistently for best part of last decade. 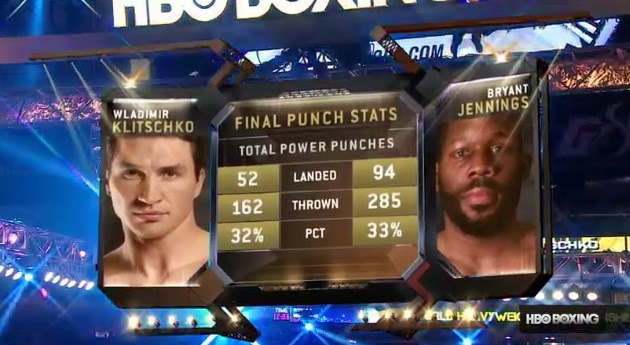 Round 1: Bryant Jennings had age, speed and quick moving in and out on his side but lacked the most important ingredient of being in big fights and Wladimir Klitschko started the stronger of the two winning the first round with ease. Klitscko 10 – 9 Jennings.

Round 2: A typical performance from Wladimir Klitschko as he uses his jab to great effect and kept Jennings at arms lenght. Second round also belong to Klitschko as Jennings is suffering from similar fate of some of the recent heavyweights who fought Wlad. Klitscko 20 – 18 Jennings

Round 3: Jennings is struggling to get on the inside as his corner is suggesting in the round breaks. Wlad on the other hand with his usual Jab-Jab strategy making Jennings open up. Klitscko 30 – 27 Jennings

Round 4: So far so easy for Klitschko, he uses 3,4 jabs without throwing any straight at the start the round four. Jennings on the other hand is moving well and making it hard for Klitschko but not throwing enough. Klitscko 40 – 36 Jennings

Round 5: Another round goes to Wlad with a total domination but Jennings is not out of this fight yet, he is moving well and at one point in the round taunt Klitschko saying “you cant hurt me”. Klitscko 50 – 45 Jennings

Round 6: Jennings had bit of success in round 6 but overall this round goes as a draw. Jennings landed a good right hand and reach Klitschko’s chin for the first time in the fight. Klitschko 60-55 Jennings