Floyd Mayweather Jnr and Manny Pacquiao will meet on 02 May 2015 for one of the most anticiapted fights in history of boxing. Mayweather announced the fight through his social media pages and confirmed the news which many boxing fans were waiting for so long. Some might argue this fight is happening 5 years too late but both of these fighters are still pretty much on top of their games and still the most renounced boxers around.

So with the official announcement of Pacquiao vs Mayweather the queries for tickets has already begin and as the things stand MGM Grand will be hosting the fight on 02 May 2015 and the tickets will go on sale after the first official press conference. On this page we will be proving you all the latest updates on when the tickets will go on sale and how can you buy the tickets. The prices will be sky high for sure so you would need to act quickly on the date of ticket announcement.

The ringside tickets are expected to go on sale for around $5,000 apiece while you might have to spend around $3000 for the tickets if you want to see the fight in MGM grand. There will be huge list of celebrities and stars who will be in attendance which means getting tickets will be even more difficult closer to the fight. MGM Grand hotel has been sold out within first hour of fight announcement which goes to show that people who really want to buy tickets through secondary market will have atmost couple of hours before the tickets are sold out so watch out for the ticket announcement and date of tickets sale.

[ New Update] Apparently there will be only 1000 tickets available to public and to get your hands on the tickets you either need to know someone or willing to spend big in secondary inflated market. The news about the availability of tickets will be announced in the first week of march when the first official press conference takes place. 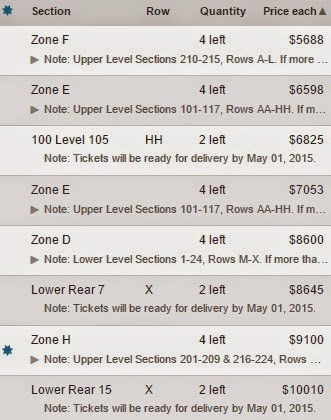 seatgeek.com has the tickets for the fight already up for sale with a few tickets available all around the mgm grand fight arena. The minimum tickets price is available from around $5688 in the upper level section in F zone.

While on the ground level closer to the ringside tickets are priced at $10,000 a piece.

On the right side there is image showing how many tickets seatgeek.com has and what price they are offering for tickets.

The key is to buy tickets as early as possible and also arrange the hotel accomodation because MGM Grand Hotel is already sold out so you need to look at alternatives. please visit 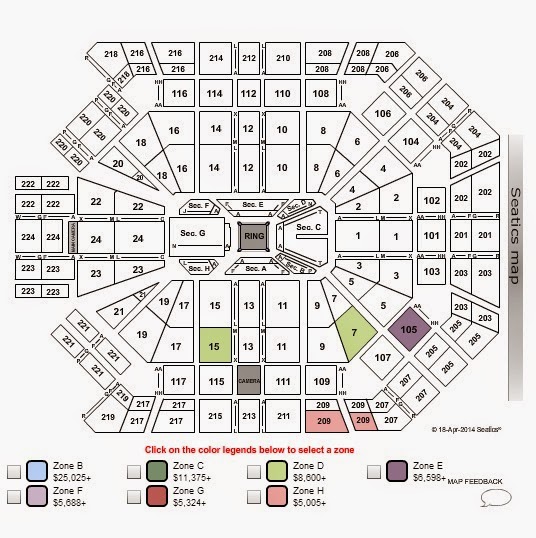 REGISTER YOUR INTEREST – [ We will update this page once we get more information about when and how you can buy tickets from USA and outside of USA. You can register your interest in Pacquiao vs Mayweather tickets and we will let you know with more details once the official tickets sale date has been set. use the form below to subscribe to Mayweather vs Pacquiao tickets ]

It is likely that their will be some tickets available at ticketmaster.co.uk after the first official press conference take place in couple of weeks. Right now ticketmaster.co.uk dont have any info but historicly speaking they always offered tickets of Mayweather fights to UK fans, but at quite expensive prices. We will update you once we have more info about how and where to buy tickets online. 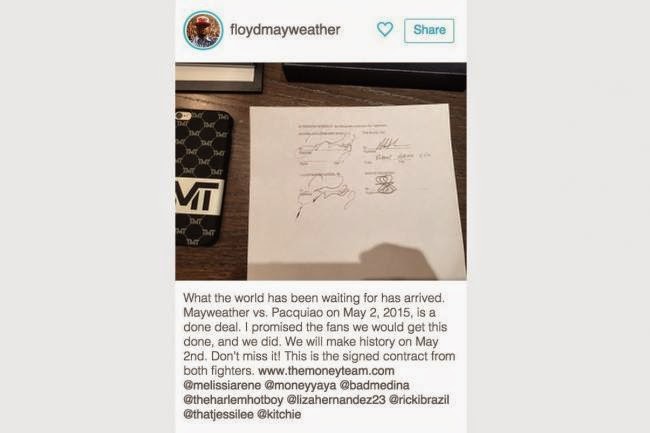 So far a few things from the contract has been made public, such as there is no rematch clause and both fighters will be fighting in their usually gloves while the purse split is set to 60-40 in Mayweathers favour while both Showtime and HBO will be involved in the broadcasting of pay per view event on 02 may 2015.

Mayweather will bring his unbeaten record on the line against Manny Pacquiao for the walterweight belts of both players making it a unification bout but titles are just a small thing at stake, there is alot of hype and the winner of the fight will take the claim of being the greatest boxer of recent generation. 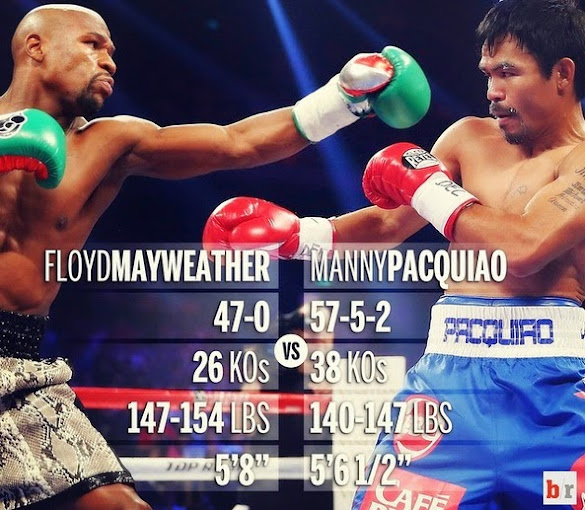