Anthony Joshua defeated Charles Martin in the second round in their IBF world heavyweight championship bout. Joshua was in control from the minute go and Martin never looked threatening. He becomes new IBF Heavyweight champion and open to bigger fights which await him later in the year. 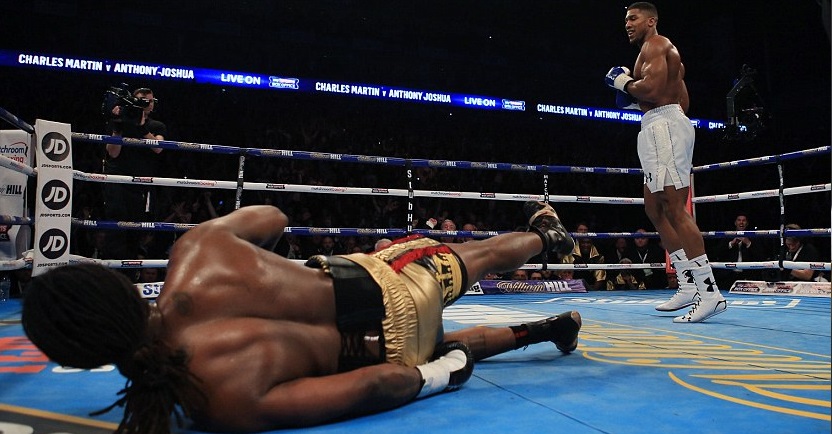 Anthony Joshua will make his first attempt to win a world title when he takes on IBF Heavyweight champion Charles Martin in what will be Sky Box-Office PPV event on Saturday, 09 April 2016 at the O2 Arena in London. Its a massive fight for Joshua and british boxing fans and there is another quality co-feature fight between George Groves and David Brophy. We take a look at how you can watch the fight live on TV and online.

Sky Box Office coverage will start at around 18:00 uk time on Saturday, 09 April with the undercard fights where couple of very tasty fights are arranged. With highly rated Lee Selby defending his IBF Featherweight title against Eric Hunter and Groves fighting David Brophy in what should be a cracking night.

02 Arena will host the big fight card where two quality fights will take place. Boxing fans living in the UK can order PPV via Sky BoxOffice priced at £16.95 / €21.95. While US viewers can watch the fight live on “SHOWTIME BOXING” regular channel (non-ppv). beIN Sports will have live coverage in middle-east countries while Canal+ to get live action for France.

Below is coverage details of the big fight night which will start with build-up show at Sky Sports 1 @ 18:00 and it will go encrypt at 19:00 for only PPV viewers.