India beat Bangladesh in dramatic style by just 1 run to get a step closer for the qualification to World T20 semifinals. Bangladesh were in control most of the game apart from last 3 deliveries where they needed 2 runs to win but bottled it in front of packed stadium.

This World Twenty20 is producing some surprising result and you won’t get a bigger shock than Bangladesh beating India in their own backyard at the biggest stage of them all as far as T20 cricket is concerned. At the packed Chinnaswamy Stadium in Bangalore Bangladesh produce their best performance in T20 world cup but came just 1 run short of making history as they bottled it in the end.

Bangladesh won the toss and elected to field first on what looked like a good batting surface. India after a decent start where Rohit Sharma (18 of 16) and Dhawan (23 of 22) put up a 42 runs stand in about 5 overs. Both openers fell shortly but Kohli (24 of 24 balls) and Suresh Raina (30 of 23) brought India to 95 runs in 14 overs. It was all setup for a late order blitz but it never came as India settled for a competitive 146 for 7.

Turning point of the inning was Tamim Iqbal’s 35 runs cameo at the top of Bangladesh batting order.

Bangladeshi bowlers were pretty good against probably the best batting lineup in the world. Chasing the target of 147 runs, Banglades lost Mithun early but a brisk start by Tamim Iqbal (35 of 32 balls) gave Bangladesh a platform to keep themselves on track for this chase. Couple of nice cemeos from Shabbir-Rehman (26 of 15 balls) and Shakib-ul-Hassan (22 of 15 balls) gave bangladesh the edge.

Ashwin was declared man of the match for his 2 wickets for 20 runs in 4 overs.

But couple of quick wickets brought India back into the game as setup a grand stand finish. But Soumya Sarkar 21 of 21 balls kept Bangladesh in the game and needing 11 of last over Mushfiqur Rahim scored two back to back boundaries getting Bangladesh to just 2 needed of last 3 balls but for some strange reasons Bangaldesh batsmen tried to finish the game off with big hits losing three wickets and in three balls and India won the game by a mere 1 run.

If you are a Bangladeshi supporter you need to switch off tv, media, internet and try to get some fresh air. India did not win this, Bangladesh choked badly when just two nudges for singles were required. 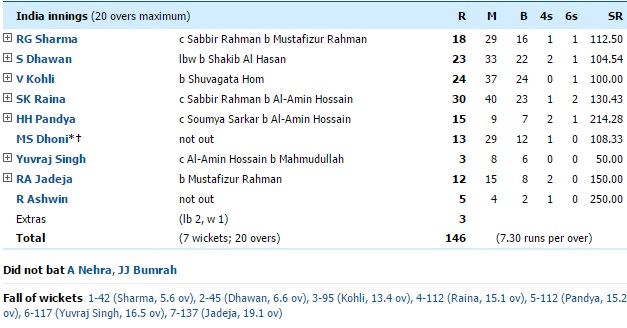 I can see this defeat haunting Bangladesh for quite sometime now as for India, MS Dhoni again proved how much important a level header captain holds in shorter format. India now needs a win against Australia to book their place in the semifinals.