India beat Australia in the third and final twenty20 game to win the 2016 T20 series against Australia by 3-0 completing a rare whitewash at Australian soil. 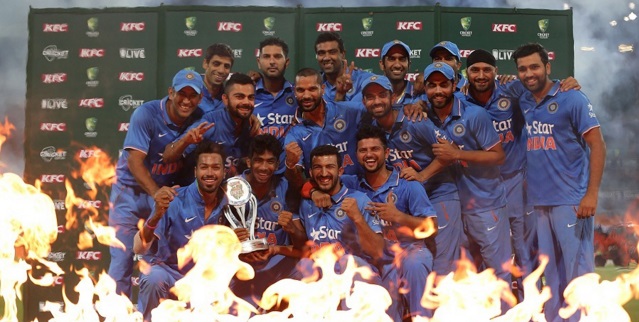 Kohli, Sharma and Raina were the stars of the show after Shane Watson had put Australia to 197 runs with his unbeaten 124 of 71 balls. Chasing a massive target Indian top order played superbly at a rapid pace. Dhawan fall after scoring 26 of 9 balls but he gave a good platform for Kohli and Sharma to accelerate at their own pace, both scored fifties and than came Suresh Raina who scored very crafty 49 of just 25 balls helped by Yuvraj Singh who hit 4 and 6 on the first two balls of last over when India needed 17 runs. Needing 2 runs of last 1 ball Raina played through off-side to get a bounday getting India over the line and completing what will be a famous white-wash. 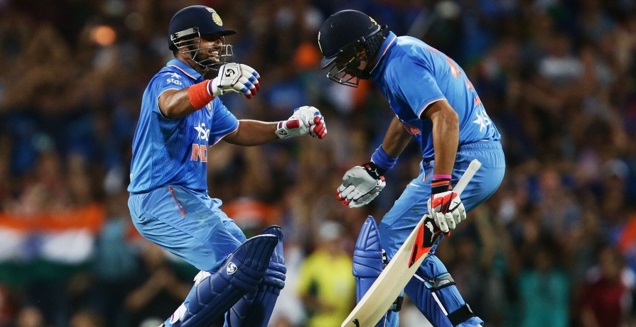 Shane Watson was judged man of the match for his impressive 124 runs of 71 balls and he also brilliantly and took 1 wicket. But man of the series award went to Virat Kohli had enjoyed highly successful Australia tour.

Shane Watson’s 124 runs went in vain as India continue their impressive run of form with batting chasing down a massive 197 runs target on the last ball of 20th over. Sharma, Kohli and Raina scored fifties to get India past Aussie target. 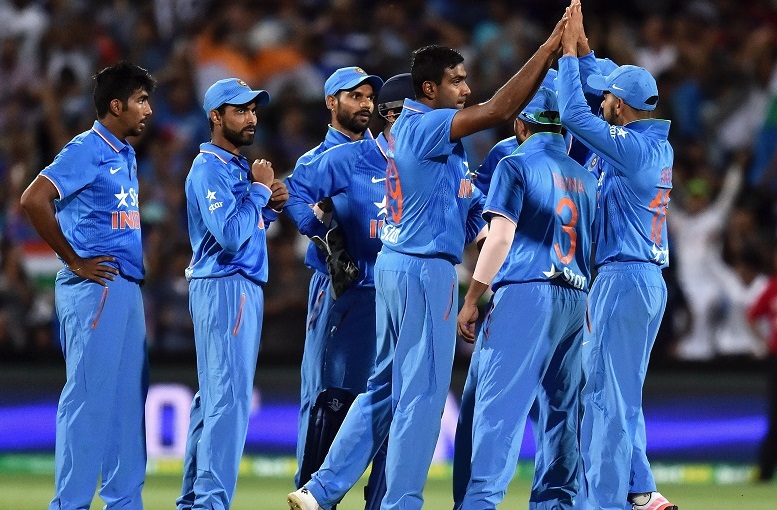 India defeated Australia by 27 runs in the second of three Twenty20 matches to seal the series win in down under.played at Melbourne cricket ground on Friday night. Virat Kohli with his unbeaten 59 runs was voted man of the match as India finally wins a series in Australia.

Australia decision to field first proved costly as India raced to 184 with Rohit Sharma and Skikhar Dhawan giving India a blistering start while Kohli added 59 runs to get India to a commanding 184 runs. Australia looked to have game in their reach as Finch and Marsh scored at rapid pace to get Australia to 95 runs in 10 overs but once Marsh got out rest of the Aussie batsman failed to capitalize on good start as Australia could only manage 157 runs.

Australian won the 5 match odi series but India managed to get the better of pretty much weakend Australia side in the twenty20 series winning the opening two games. Virat Kohli continue his superb form while Rohit Sharma and Shikar Dhawan have been sensations top the order. 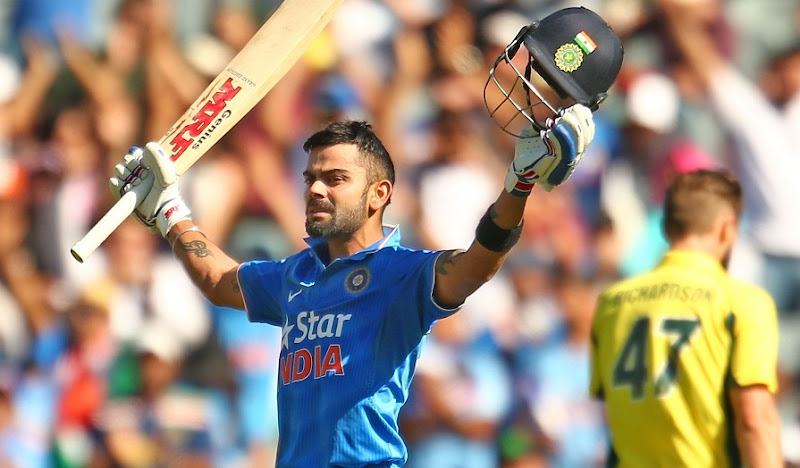 India has been pretty solid in the batting department so far but their bowling has been exposed as they failed to defend around 300 total three times in a row which will be a worrying sign moving forward.

Australians on the other hand have won 17 back to back ODI matches in Australia and it does not look like they are going to lose anytime soon with the kind of batting depth they have. 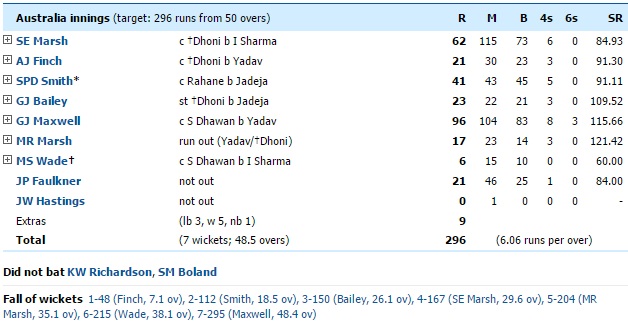 Next up will be the fourth ODI in Canberra on Wedneday, 20th January 2016. India has only pride to play for in the remaining two games and we can expect Dhoni to make couple of changes in the playing XI.

India is going to introduce Rishi Dhawan, Barinder Sran and Gurkeerat Singh at some point in the series while Muhammad Shami has been sent back after suffering injury and Bhuvneshwar Kumar has been called to the squad for the 5 odi matches. India played Australia in the ODI game back in 2015 World Cup in Australia where the homeside came out triumph with a 95 runs victory sealing their place in the final and eventually won their 5 cricket world cup.

India does not enjoy playing Australia in Australia, having lost 31 of the 43 games played between the two in down under.

Australia are in pretty solid form at the moment just returning from West Indies tour where they demolished the windies and historically speaking Australia has a pretty good record against India in the limited over matches at home soul. Of the 43 matches played between the two teams in Australia, Aussies has won 31 and lost 10 ODI games while in the last 5 years India has only beaten Australia once in 7 matches played between the two.

Indian batting lineup is pretty strong but its their bowling department who needs to up their game considering Australia has some quality pinch hitters at top of the order who can take the game away from opposition in matter of overs. David Warner has been in superb form in 2015 scoring hundred after hundred and he comes into this game on the back of quick fire 122 runs against West Indies of just 105 balls in a test match. So he will be the player India want to contain the most. While India batting depend alot on Virat Kohli who in fairness has been “out of sorts” past year.