India has won the three match Twenty20 series against Sri Lanka after racing to a 9 wicket win in the third and last T20 played on Sunday at Visakapatnam cricket ground. Dhoni won the toss and elected to field first where Ravi Ashwin blitz through Sri Lanka top order and Indian chased down a modest 83 runs target for the loss of only 1 wicket.

Ravi Ashwin was declared man of the match after his 4 wickets in 4 overs which pretty much killed the game inside first 10 overs of Sri Lanka inning. Sri Lanka lost 5 wickets for just 21 runs and bundled out for 82 runs in total. India’s lost Sharma for just 12 runs in chase but Dhawan scored 46 and AM Rahane made around 22 to get India through. 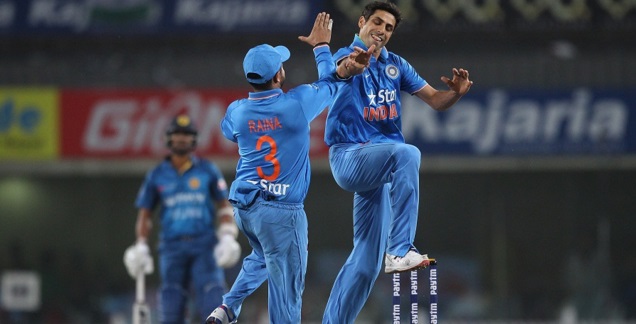 Sri Lanka struggled from the minute go and lost wickets at regular intervals. Ravi Ashwin who opened the bowling took three wickets while Nehra and Jadeja took 2 each to bundled Sri Lankas for just 127 runs.

India vs Sri Lanka – First Twenth20
Date: Tuesday, 09 February 2016 – Time: 19:30 local
Channel: StarSports (India) will have the live coverage of the game while skysports might broadcast the match in Uk starting at 14:00 uk time.

Preview: Indians has already made the statement with their 3-0 white-wash of australia ahead of much anticipated Twenty20 world cup taking place in March. From now to the start of T20 world cup in mid-march India will be playing plenty of T20 matches 3 against Sri Lanka, than three more in the Asia Cup followed by couple of warm-ups to get use to local pitches after long Australia tour. Keeping this in mind India has decided to rest Virat Kohli and test couple of youngsters in the sri lankan series.

Sri Lanka will also use these games to prepare themselves for the big event where they will be defending their title having beaten India in the final of 2014 T20 world cup couple of years ago. Sri Lanka also hit by couple of injury worries with Tillakaratne Dilshan also ruled out putting loads of pressure on in-experience sri lanka top order.

If we look at the past record between the two sides in this format, Both have one 1 game a piece in the two t20 played in India but Sri Lanka has a up-hill task to get something out of this series against in-form and resurgent Indian side who are the hot favourites to win T20 world cup.