Cricket has come along way in the last 2-3 decades from colour kits to Twenty matches and extensive broadcasting with so many different camera angles. The introduction of T20 which is a fast paced cricket format players are more eager to take the aerial route now compared 90’s era combine that with new bat technologies and batting paradise wickets around the world we often see fastest fifties, centuries and even double hundreds in ODI cricket.

See Also: Batsmen with most sixes in international cricket

Cricket has evolved and there is no better sight than a batsman getting under the ball and hitting it out of the park, today we take a look at some of the longest sixes hit in international cricket. Of course the footage below only contain sixes hit in what I like to call modern day broadcasting era starting from late 90s to date.

India needing 12 runs of last 4 balls against Australia, MS Dhoni produced one of his trademark shots which sailed over not only the long boundry at Adelaide Oval but also quite a few rows back. As far as distance is concerned it was recorded at around 112 meters.

#9. Ijaz Ahmad vs India at Mohali

Former Pakistan batsman Ijaz Ahmad was a batsman who only had two gears in him while batting regardless of the pitch or team he is playing against. He could either just keep the scoreboard ticking with singles or go into beast mode every now and than and in 1999 match against India at Mohali he hit two sixes one of which sailed over the stadium. The distance is not recorded however but looking at the footage it was around 110 to 115 meters atleast.

#8. Corey Anderson vs India at Napier

Corey Anderson broke Shahid Afridi’s long standings fastest 100 in ODI record last year and its evident that he can hit the ball long way with rather ease. Playing against India at Napier he hit four sixes in the game and couple of the shots went out of the stadium. Again distance is not recorded but it was huge sixes which could have kept going had it not for the roof tops.

You can’t talk about sixes with out mentioning Shahid Afridi name, the guy was in T20 mode even 10-12 years before the actual berth of twenty20 cricket. Afridi has the record of most number of sixes hit in ODI and overall combined in test, odi and t20. He has recorded some of the biggest hits in world cricket and one of them came on tour against Australia.

Many experts believe this six of Vettori’s bowling by Mark Waugh is the longest six ever hit. Well its certainly one of the biggest but only before the T20 era. regardless of the distance it was one clean shot by one of the most elegant batsman of all times.

Fresh of hitting 6 sixes in an over against Chris Broad of England in the quarter finals of T20 world cup 2007, Yuvraj produced another starling performance against Australia in the semifinals as he hit 70 of just 30 balls helping India to reach the final. He hit a massive six of Brett Lee bowling with just the flick of the wrist and it sailed over the 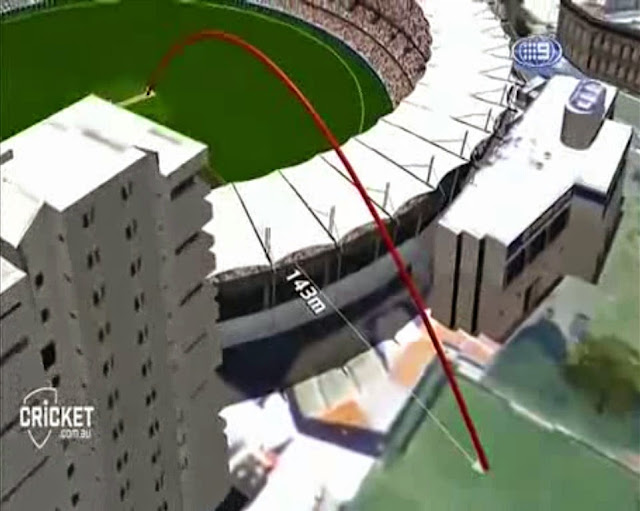 Brett Lee was often at the wrong end of big sixes but he himself could clear the ropes when in form. Brett Lee had a natural swing with the bat and West Indies bowler felt the real meat of Brett Lee bat back in 2005 when he produced this monster shot

Pakistan were chasing a lost cause of 350 runs against South Africa in the 3rd match of ODI series. Ryan McLaren had just bowled Afridi but it was called a no-ball meant a free hit for one of the biggest hitters in world cricket. What does Afridi do he connects the next ball so good it went over the roof with ease and here is a video Alex Stewart and paul Collingwood discussing Afridis six and other big hits.

We leave you with what probably is the biggest sixes in history of cricket, this came in the Australian Domestic Big Bash event when left handed Zard Ali connects and it goes beyond the stadium roof into the near by parking lot.