Formula 1 season comes to its final race which takes place at the Yas Marina Circuit in Abu Dhabi this Weekend starting from Friday, 24th November 2017 and the big race will take place on Sunday, 26 November 2017. Lewis Hamilton has already wrapped up his record fourth Formula 1 title so not much to play for as far as the title race is concerned but with pressure off, we might see a thrilling F1 race weekend.

Its all starts this Friday, 24 November 2017 with the opening practice session starting at 09:00 am uk time and both SkyF1 and Channel4 will have the live coverage in the United Kingdom. The qualifying takes place on Saturday, 25th November at around 13:00 and the big race on Sunday, 26th November at 13:00 uk time.

Abu Dhabi Grand Prix Preview: Lewis Hamilton has the momentum going into the race having won three back to back races as he got himself back into the title race but with Rosberg still ahead by 9 points Hamilton needs a miracle to get the better of Rosberg in championship race.

Mercedez has dominated the season with both Ferrari and Red Bull not keeping up with the Mercedes duo and we can expect a similar story on Sunday. I expect both Hamilton and Rosberg to finish on podium which will hand the title to Rosberg.

How Nico Rosberg won the 2016 Title ? He started stronger this season and won the opening three race to put a statement early on but Hamilton bounced back and overtook Rosberg in championship table midway through the season. But than came couple of poor results for the Brit while Rosberg continue to finish on podiums even when he was not winning races. The breaking point came in japan where hamilton suffered a DNF and from than on it was uphill task for Hamilton to bounce back.

In Abh Dhabi Hamilton looked for more stronger and faster than Rosberg and he raced to a comfortable win but it was not enough as Rosberg himself took second place which sealed the title in his favour.

[ Full Race replay video of this Abu Dhabi grand prix 2016 will be available couple of hours after the race. If you missed the live action, you can always tune in here for extended replay ]

2015 Abu Dhabi Grand Prix Review: Lewis Hamilton won the 2014 grand prix with a two-stopper strategy and he started the race with super-soft tyres later changing to soft ones. He won the race and became the world champion for second time in his career. Alot of celebrities and some elite members will be their this Sunday for what will be the last race of the season. Since the championship race in both drivers and constructors is already won all teams will give it a real go and we can expect a fine race come Sunday night. 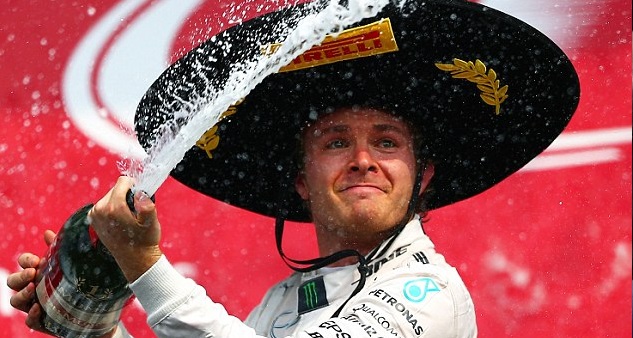 Nico Rosberg has been in sensational for since Lewis hamilton won 2015 world title in Austin, Texas last month. Rosberg has won 6 back to back pole positions and 3 back to back races since than. He took his points tally to 322 points winning 6 race this season compared to Hamilton’s 10. 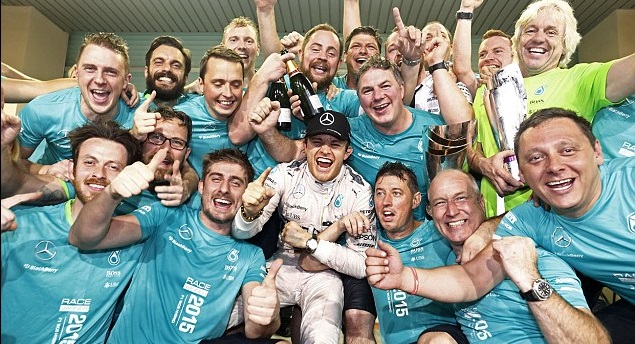 Rivalry between the two Mercedez drivers blew hot and cold this season and according to Rosberg himself the lowest point of the season was when Hamilton was crowned champion last month. But since than he has won every race and can’t wait for 2016 season to get underway. 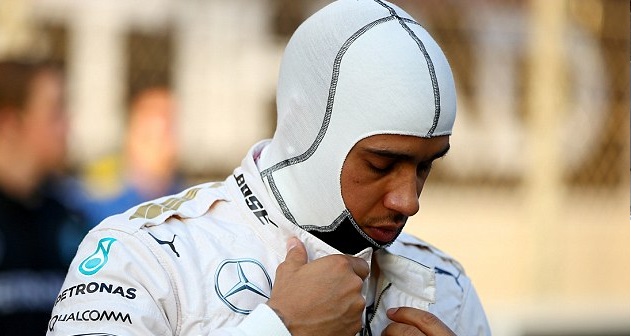 One school of thought is that Lewis Hamilton has taken foot off the gas since winning his third world title last month. He was in the news and was criticised for having a very party lifestyle by Mercedez team manager. But both Hamilton and Rosberg won 16 races of the 19 this season completing incredible dominance of Mercedez this season.

Abu Dhabi F1 Grand Prix Results: We will update the result of qualifying after the session is over on saturday while the sunday’s race result will be posted immediately after the chequered flag. 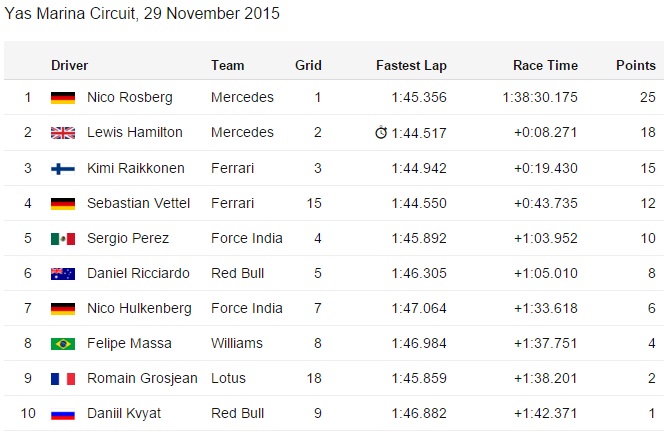