Daniel Ricciardo has won the 2017 Azerbaijan Grand Prix with Valtteri Bottas and Lance Stroll finishing second and third on the podium respectively. Championship leader Sebastian Vettel finished fourth but managed to extend his lead at top of the drivers championship as Lewis Hamilton could only finish 5th.

Sebastian Vettel recorded the fastest lap and was in good nick most of the race apart from that incident where he hit Valtteri Bottas who himself had a shaky start when he collided with Raikkonen and had to change car nose. Hamilton will be massively disappointed after failing to capitalize on pole position.

Eighth formula 1 Grand Prix of 2017 season takes place this weekend in the newest F1 circuit in Baku, Azerbaijan. Also known as European Grand prix will be the second F1 race on this circuit after it made its debut in 2016 season. Nico Rosberg won the first every race here and Mercedes will be hoping Lewis Hamilton or Valteri Bottas win the second one. The coverage begins on Friday morning at around 10:00 am uk time with the opening practice session. If you missed the live action, you can always tune in here for full race replay video.

Political stuff aside, Azerbaijan Grand prix will provide a new life in drivers championship and its great chance for teams like Red Bull and Ferrari to take points off Mercedes who has been dominant again. Lewis Hamilton is back in the championship race after winning two back to back grand prixs while Nico Rosberg will be determined to get back on winnings ways as we move into the business end of the season. 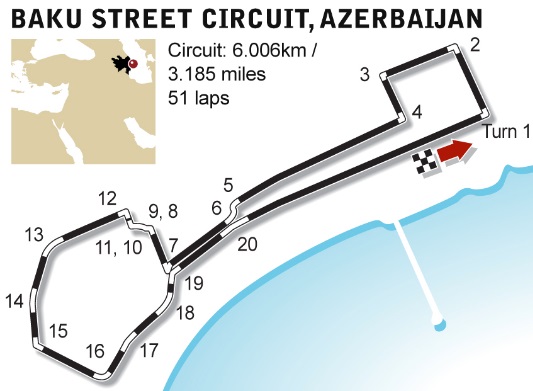 Baku City Circuit is a converted F1 track from normal street track. The track revolves around the city center of historic capital “Baku”. The track goes along number of famous monuments and landmarks of the city. It will be a 3.7-mile lap which is dominated by right angle turns with couple of long straights specially the last section which is will be one of the longest straight in F1 calendar this year.

Mercedes will have slight advantage over both Red Bull and Ferrari considering the layout of the track. Having said that, its being new track any small mistake can lead to disaster both Hamilton and Rosberg.

Azerbaijan (European) F1 Grand Prix Qualifying & Race Results: Qualifying will be taking place on Saturday,18th at around 14:00 uk time. We will be updating the right here as soon as the qualifying results are out. While the big race is scheduled to start at 17:00 local/14:00 uk time on Sunday, 19th June. SkyF1 will continue to broadcast the extension F1 coverage in the UK while you can also catch live action for European Grand Prix on terrestrial uk network “Channel 4”

Azerbaijan Grand Prix 2016 Review: Nico Rosberg has won the first ever Azerbaijan Grand Prix in Baku after leading from start to finish having started at the pole position. F1 title challenger and defending champions Lewis Hamilton suffered yet another terrible start but managed to get a respectable 5th place. Sebastien Vettel finished second while Sergio Perez took the third position on the podium. 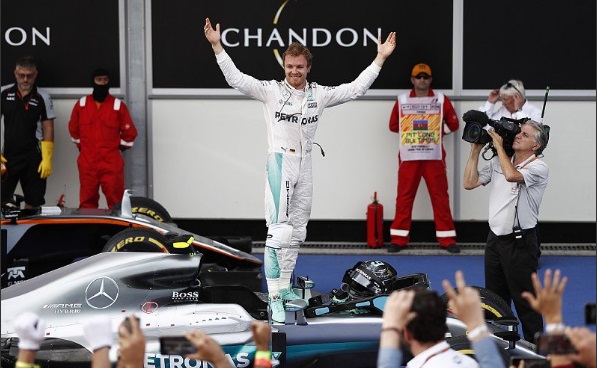 Nico Rosberg becomes the first driver to win the Azerbaijan Grand Prix which will be a regular fixture in F1 calender in years to come. Overall It was a great F1 weekend where Lewis Hamilton dominated from friday to Saturday but surprisingly he was terrible in the qualifying which cost him a decent start on Sunday. 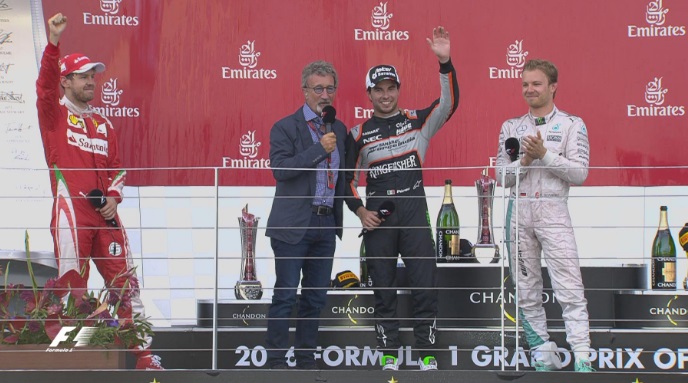 Sebastian Vettel finished second behind Rosberg but he never looked like giving Rosberg and Mercedes and decent fight which is a real shame while Force India’s Sergio Perez finished third on the podum.