Lewis Hamilton won the home grand prix at Silverstone after dominating the entire weekend and winning the British Grand Prix on Sunday. With this win he now trails Championship leader Sebastian Vettel by just 1 point as we move to Hungary Grand Prix on 30th July. Mercedes had a field day at Silverstone taking both first and second places at the podium and Valteri Bottas continue to impress. Sebastian Vettel couple only managed a 7th place finish.

Hamilton was quite vocal of his chances going into the British Grand Prix and boy did he delivered when it really mattered. Mercedes looked imperious throughout the weekend and Hamilton made no mistake in both qualifying and the race to win 2017 Grand Prix. Below are the official results from Sundays race.

British Grand Prix which might be the last one at Silverstone for quite sometime will be taking place this weekend from Friday, 14th July 2017 to Sunday, 16th July 2017. The friday coverage begins with the first practice sessions starting at around 09:00 am uk time. Sebastian Vettel leads the championship going into the 2017 British Grand Prix with 171 points thats 20 ahead of Lewis Hamilton and this weeks will be crucial in championship race. If you don’t have access to live action you can tune in here for live links and race highlights.

Its a massive weekend as far as the F1 title race is concerned. If Lewis Hamilton can repeat his 2015 success at silverstone this weekend he might go top of the standings by the end of the week. There is only 11 points different between Rosberg (153) and Hamilton (142). While Ferrari and Red Bull will be looking to keep up the pace with the Mercedes duo.

Lewis Hamilton won the 2015 British Grand Prix having recovered from a bad start and that win proved pivotel as he went on to win 2015 F1 title.

Silverstone is a special grand prix in so many ways as one of the oldest and most lucrative GP in formula 1 calendar. Its being Hamilton’s home grand prix most of the focus will be on him as he try to overtake Rosberg in championship standings.

British Grand Prix 2016 Results & Replay:
SkyF1 will continue to broadcast F1 races live in the UK and we will have live coverage with free links starting from Friday’s practice sessions. We will also update the qualifying results and the race results as well as full race replay video on Sunday couple of hours after the race. 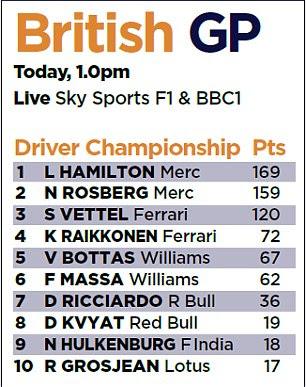 Going into the sundays british grand prix Lewis Hamilton has been installed as favourite but Rosberg will be confident of using his momentum of winning the last race to reduce the current gap of top 10 points in the championship table as he trails behind Hamilton.

SEBASTIAN VETTEL finished 6th in the qualifying and currently has 120 points to his name, he is not out of the title race just yet but need to start pick up points regularly and hope Mercedez duo have difficult second half of the 2015 season.

So Lewis Hamilton has won the 2016 British Formula 1 grand prix in at Silverstone beating off the challenge from team mate Nico Rosesberg who himself finished second followed by Max Verstappen in third place. Hamilton now trail only by 4 points in the championship race after his fourth grand prix win of the season.

Lewis Hamilton started in the pole position after a superb qualifying but just before the race we had massive showers forcing race to start with safety car which kind of helped Lewis Hamilton’s cause. He was dominant for the most part leading to his third consecutive win at Silverstone and now just trail by 4 points of team mate Nico Rosberg.

British grand prix 2016 results: Hamilton continue his resurgence by winning third consecutive race of the season which has reduced the points gap between him and leader Nico rosberg to just 4 points. Max Verstappen will be delighted with another podium finish while Daniel Ricciardo finished fourth followed by Ferrari’s Kimi Raikkonen.