Lewis Hamilton has won the 2017 Chinese Formula 1 Grand Prix in Shanghai as he lead from start to finish having won the pole position and register his first grand prix win of the season. Ferrari’s Sebastian Vettel was impressive and finished second on the podium ahead of Red Bull duo Max Verstappen (3rd) and Daniel Ricciardo (4th).

Chinese Grand Prix 2017 Race Results: It was a very solid performance from Lewis Hamilton who looked in control throughout the weekend and nearly produced a perfect race from start to finish. Ferrari do look like proper challengers this season considering Valtteri Bottas is new to Mercedes who could only finish 6th in Shanghai. However Red Bull do look like improving and Sunday 3rd and 4th place finish will give them an edge.

As the things stand after two races Sebastian Vettel and Lewis Hamilton are joint top with 43 points each and it looks like a two horse race for the drivers championship so early in the season.

On the right side you can see the drivers championship table after first two races off the season and I can see it more a less same standings by the end of the 2017 F1 season.

Sebastian Vettel and Ferrari looked in impressive form in the first grand prix of the season in Australia while Mercedes predictability snatched second and third place on the podium which suggest this season Ferrari might just be able to put together a title race both in terms of driver championship and constructors title. We move to the second grand prix of the season which takes place in Shanghai, China this weekend starting from Friday, 07 April 2017 and the race will take place on Sunday, 09 April 2017.

Sebastian Vettel has made his intentions clear in the opening race of the season by eclipsing Mercedes duo to the grand prix win. It came as a surprise to many and sheer frustration for Mercedes team boss even though they snatched 2nd and 3rd on the podium.

Ferrari who were widely tipped to put up a better challenge for Mercedes look like real deal this season and China give them another oppertunity to get under the skin of Mercedes drivers who already look shaken up after first race of the season..

As far as surprise package is concerned, Haas has been absolute breath of fresh air having taken 6th and 5th place on the podium in the first two races respectively. Romain Grosjean has shown that he is well equipped in Haas F1 car to take control of 5th place.

Lewis Hamilton has been very successful at Shanghai international circuit having won four grand prixs here back in 2008, 2011, 2014 and 2015 while Fernando Alonso is the only other driver to have won more than once here. Mercedes has dominated Chinese grand prix in last two years and they are the favourites to do well here this weekend.

We will have the live results and highlights after the qualifying rounds as well as Sundays big race so tune in here for latest updates throughout the weekend.

2016 Race Review: Nico Rosberg has won his third straight grand prix of the season as he dominated the F1 weekend in China. He started in the pole position and lead from start to finish in what was a very exciting race in Shangai. Sebastian Vettel finished second while Daniel Kvyat made it to the podium in third place. 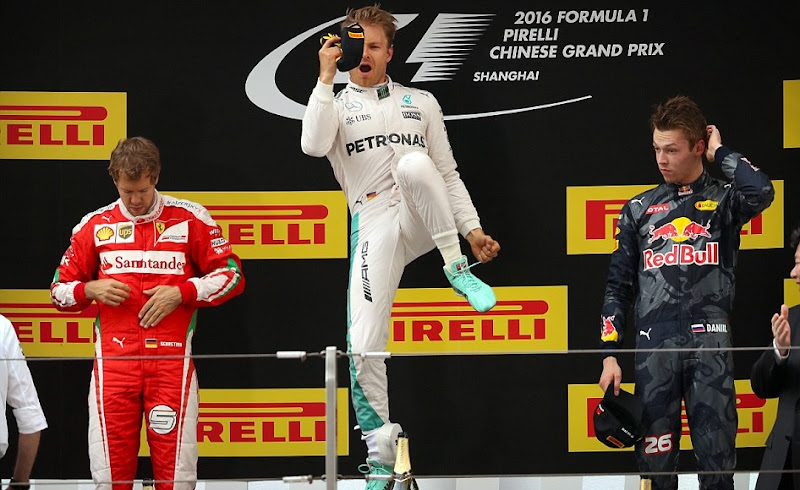 Both Ferrari’s were quick of the line but made contact with each killing their chances of battling for first place. Daniil Kvyat had exciting race and bagged a podium finish. 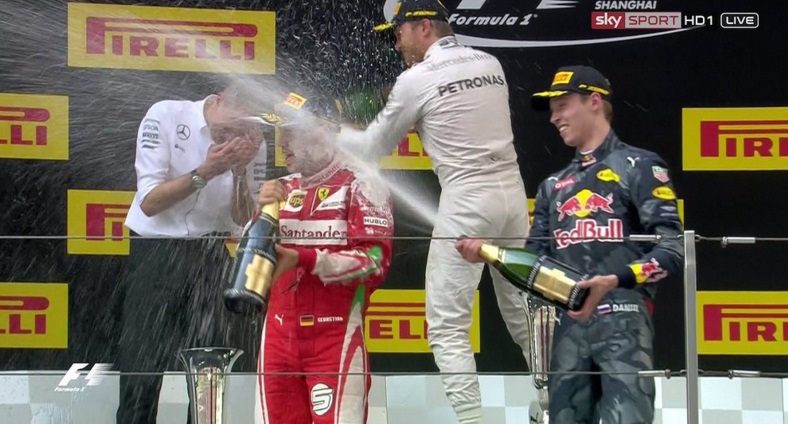 Lewis Hamilton who started at the back of the grid after terrible qualifying made his way respectable 7th place and it might prove crucial if he can mount a title challenge later in the season. Vettel, Raikkonen and Kvyat were involved in early scuffle in on the first corner and Vettel was furious with Kvyat for risking which could have ended both Ferrari’s drivers race. As the things stand its hard to see anybody trouble mercedes this season. Rosberg and Hamilton has won 35 races between them in the last 41 grand prixs while Rosberg has been so dominant that he is on a 6 grand prix win streak starting from tail end of the last year. 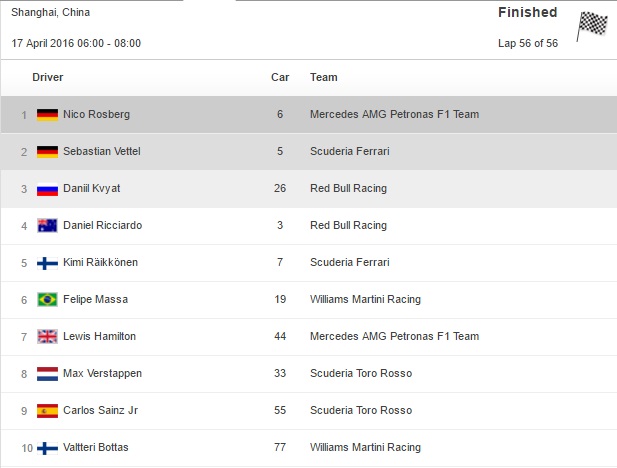