Sebastian Vettel has won the 2017 Hungary Grand Prix in Budapest after incredible weekend where Ferrari secured top two positions on the podium. Kimi Raikonnen finished runnersup while Mercedes duo of Valteri Bottas and Lewis Hamilton managed to get third and fourth place respectively.

Vettel now leads the championship table with 202 points and thats 14 ahead of Lewis Hamilton who seems to be struggling this season one way or the other. Valteri Bottas was happy with the third place finished but the weekend belonged to Ferrari who secured one-two on the podium in Budapest. Below are the official results from Sunday’s Hungary Grand Prix.

We move to 11th grand prix of the season which takes place in Budapest, Hungary this weekend from Friday, 28th July to Sunday, 30th July 2017. Ferrari’s Sebastian Vettel and Mercedes Lewis Hamilton are separated by just 1 point going into the weekend which makes it a crucial grand prix before the summer break. The Friday coverage begins at around 09:00 am uk time with first practice session, Saturday’s qualifying starts at 13:00 uk time and the big race on Sunday, 30th July at around 13:00 uk time.

Mercedes has kind of turned the corner in last couple of grand prixs and they looking pretty good going into the business end of the season. The championship table is pretty tight at the top with Valtteri Bottas trailing Sebastian Vettel by just 17 points and it would not surprise me by the end of the season that title race might be contested between Bottas and Hamilton.

Hungary 2016 F1 Grand Prix Results: Nico Rosberg started in the pole position but he suffered a slow start leaving Hamilton to sneak past him on the opening lap. With the results in Hungary, Hamilton now leads the championship by 6 points with his total of 192 points while Rosberg is second with 186 points. Daniel Ricciardo finished third on the podium ahead of Ferrari’s Kimi Raikonnen.

This was Hamilton’s record breaking fifth grand prix win in Hungary and it also put the momentum entirely with him as we move to Germany next week where 12th round of Formula 1 2016 season will take place.

Its all setup for Hamilton to continue his resurgent form having won two back to back grand prix and only one point separate the top two. SkySports F1 will continue to broadcast the race live in the UK with their extensive coverage plan starting at around 8:45 am uk time on Friday with the practice sessions followed by 1:00 pm qualifying and race on Saturday and Sunday.

Apart from the top two nobody looks to be in contention for the title race which means both Mercedes drivers will fight it out for the 2016 F1 title. only 16 points separate the 3rd place from sixth which brings element of excitement as Both Ferrari drivers trying to get the better of Red Bull duo of Daniel Ricciardo and Max Verstappen.

Lewis Hamilton has won the Hungary Grand Prix twice in 2012 and 2013 while Sebastian Vettel was successful last year.

Hungary Formula 1 2016 – Qualifying & Race Results:
Mercedez dominate continue as we head to the later stages of the Formula 1 2016 season. Lewis Hamilton was by far the fastest driver whole weekend and looked pretty comfortable with speed and the car. He will be highly favourite to win his fifth race of the season. We will have the latest results and highlights from both qualifying and the sundays race. 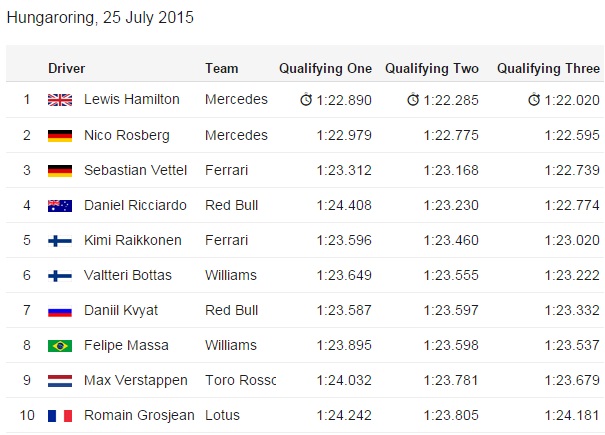 Hungary F1 Grand Prix 2016 – Highlights Replay Video:
The race is schedule for Sunday at around 14:00 local time / 13:00 uk with SkySports F1 broadcasting the race live in the United Kingdom. We will place the full race replay video highlights after the chequered flag.

Usually it takes anything around 2-3 hours to upload the full race video and than place it on the site. So you can bookmark this site and visit back after the race to catch the replay.