Lewis Hamilton has won the 2017 Spanish Grand Prix after incredible race in Barcelona overtaking Sebastian Vettel who finished runnersup ahead of Red Bull’s Daniel Ricciardo. Mercedes’s Valteri Bottas had to withdrew just like Ferrari’s Kimi Raikkonen. Belew are the official results from the race day.

Lewis Hamilton and Sebastian Vettel continue their rivalry and with Hamilton winning his second grand prix of the season, he trails Vettel by just 6 points and now both have won 2 races each in the opening 5 grand prixs. Lets take a look at Sunday’s Barcelona grand prix results.

Spanish Formula 1 Grand Prix 2017 Results: Hamilton’s win has now narrowed the lead at top of the drivers championship to just 6 points and its perfectly evident from early season results that this year’s title will be decided between Hamilton and Vettel.

Formula 1 2017 season moves into its full swing as Barcelona’s Circuit De Catalunya host fifth grand prix of the season this weekend from Friday, 12 May to Sunday, 14th May 2017. So far Sebastian Vettel has set the pace in the opening four races winning two and finish on podium in each of them securing 86 points and thats 13 ahead of Mercedes driver Lewis Hamilton who is second with 73 points. This weekend’s coverage begins at around 09:00 am uk time on Friday and we will have race highlights and results right here on this page.

Last year it was Nico Rosberg who won and in Spain and if he were to win this year’s race in Catalunya he will make a massive claim for F1 title with only five races down the line. He currently leads championship table by 43 points with his perfect 100 points of the the first four grand prix, his teamamte and defending champion Lewis Hamilton is second with 57 points. This is a massive weekend for both Rosberg and Hamilton as Brit can close the gap at the top and Rosberg has a chance get off the sight with another win. 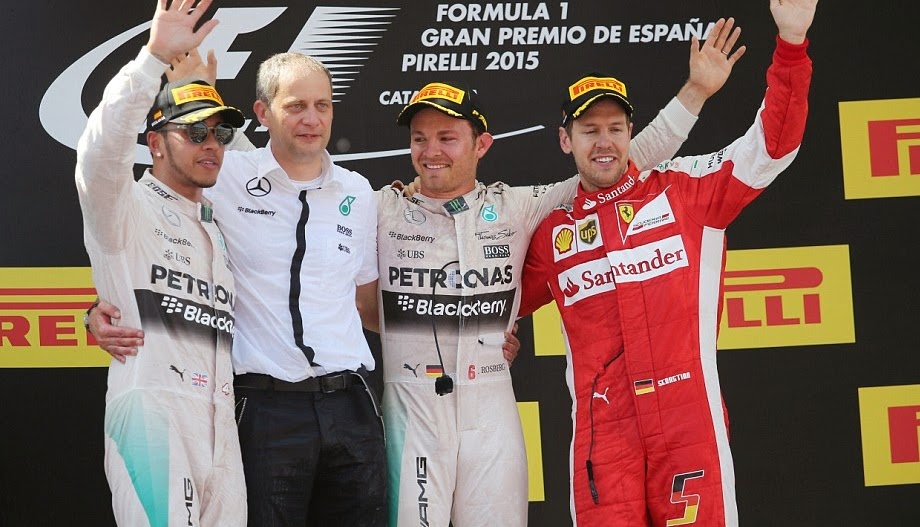 Nico Rosberg won the 2015 Grand Prix in Spain and he will be looking to get his fifth straight win this weekend.

Catalunya Grand Prix 2017 Results & Replay Video: Sunday’s Spanish Grand prix will begin at around 13:00 uk time and we will have the full race results updated here immediatley after the chequered flag while full race replay video will be available couple of hours after the race is over.

Here are the official results from the last season’s Spanish Grand Prix 2015. Rosberg won the race while Hamilton was close second ahead of Vettel in third.. 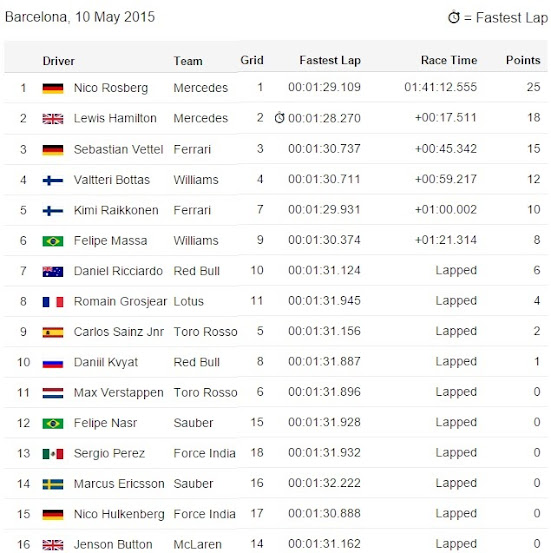 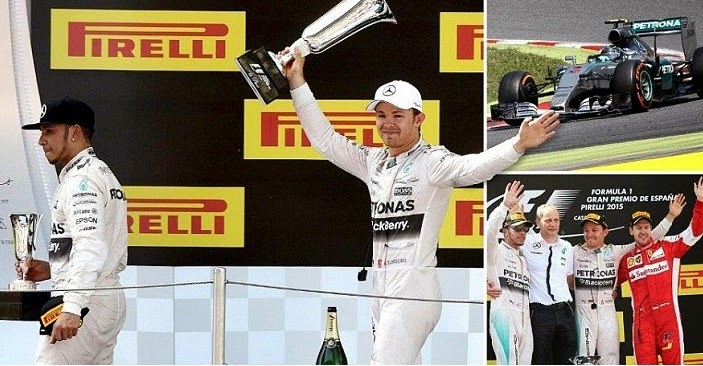 The first race of Formula 1 european leg will be taking place in Spain this weekend on Sunday, 10 May 2015. Lewis Hamilton has bee sensation this season so far and already racked up 93 points after just 4 races in the season and lead the championship ahead of Mercedez team mate Nico Rosberg who has 66 points and Ferrari’s Sebastian Vettel has 65 points after 4 races into the 2015 season.

Spanish F1 Grand Prix Qualifying Results:
Nico Rosberg snached the pole position after impressive qualifying rounds on saturday afternoon and he will be leading the pack ahead of Lewis Hamilton who finished second in the qualifying session and made it 1-2 for Mercedez at top of the grid. Ferrari’s Vettel finished third and there were no surprised on top three drivers but the real talking point was McLaren’s horrific season continue as Fernando Alonso and Jenson Button finished 13th and 14th respectively