Roberto Martinez has announced the final 23-man squad for Belgium and there were couple of surprises with Nainggolan missing out despite a decent season with AS Roma. While Adnan Januzaj has been selected in the final 23 man squad. 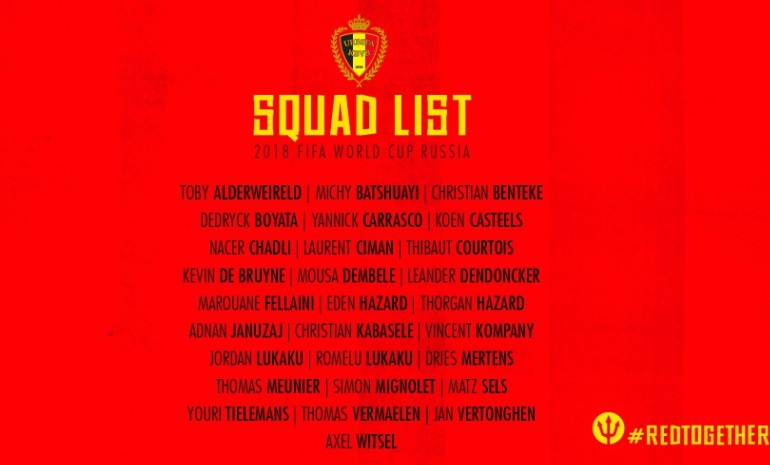 Belgium looking forward this year to give tough competition in FIfa world cup 2018 held in Russia. Roberto Martínez current head coach of the team made big changes that required in the squad. In world cup qualifiers Belgium performance improved and they have scored number goals that tells the full story of their preparation for the world cup 2018 in June and July. Eden Hazard lead the team of Belgium as skipper in world cup matches.

Martinez was appointed as Belgium coach in August 2016 after Marc Wilmots lead Beglium to quarterfinal finish in 2016 Euros. Under Martinez Belgium qualified for World Cup 2018 pretty much without breaking a sweat but that was expected considering the quality in the squad. Martinez appointment was criticized at the time specially after his failure at Everton and it will be interesting to see how this golden generation of Belgium goes about their work when it really matters.

Belgium has such a quality squad that it is almost impossible to predict their starting lineup and it may come down to the last few weeks of the season and player forms for Martinez to make up his mind. However their are certain positions which are pretty much fixed with Romelu Lukaku playing upfront while Eden Hazard, Kevind De Bruyne playing in attacking roles Dembele in central midfield while Thibaut Courtois starting in goal. Toby Alderweireld Jan Vertonghen are the other two players who will get the nod considering if they are fit.

Mertens, Nainggolan and Thomas Meunier are the other few names who might be preferred by Martinez. Having said that it will come down to player fitness and form going into the world cup month.

Belgium football team drawn in Group (G) of world cup 2018 alongside (England, Tunisia, Panama). On 18th June they will play their first match of world cup against Panama. Its a tough group for Belgium they have to perform extraordinary in the first two matches to ensure their place for knockout rounds.