Brazil are set to take on Ecuador in the World Cup qualifier game on Thursday night, 31 August 2017 in a game which holds significant importance as with a win Brazil will almost confirm their qualification for 2018 World Cup in Russia. Ecuador on the other hand must win to keep their chance of qualification alive.

Brazil will be without number of key players but with Douglas Costa, Willian, Coutinho playing in attacking roles behind in form striker Jonas they should have enough firepower to see off the group b. Knockout stages is where they might have a problem and miss their star names. But Dunga is confident that players can rise to occassion and make a claim for consistant national team selection in the future.

Ecuador 0-3 Brazil – 01 September 2016
[ South America World Cup qualifer ]
72′ 0 – 1 Neymar scored what proved to be the winning goal in second half.
76′ [ Red Card ] Juan Carlos Paredes was sent off from second bookable offence
87′ 0 – 2 Gabriel came on as second half sub to score the second goal for Brazil.

Team News & lineups: Brazil coach Dunga has decided to rest number of key european based players with Neymar, Thiago Silva, David Luiz and Oscar set to miss out while some fringe players are given a chance to be part of a major international competition. Benfica’s inform striker Jonas is tipped to start upfront for Brazil after his absolute beast of a season in Portugal while Liveprool’s Coutinho, Chelsea’s Willian, Elias and relatively unknown Renato Augusto who play in China are expected to start in midfield alongside Wolfsburg’s Luis Gustavo. Flipe Luis, Miranda, Gil and Dani Alvez set to start in back four while Allison will play as keeper.

Ecuador on the other hand selected their strongest side and they will be lining up with usual 4-4-2 formation. Enner Valencia and Bolanos are set to play upfront with Antonio Valencia, Montero, Gruezo and Noboa to make the four man midfield.

This is how we expect both teams to lineup on Saturday. Its a crucial game a win for either side will go along way in sealing their qualification to next round. 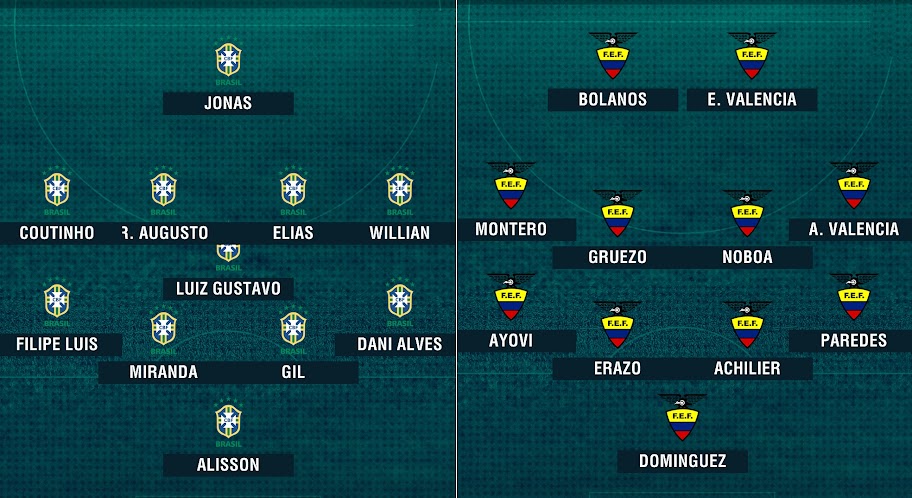 Match Predictions: Ecuador are currently 12 in the FIFA rankings thanks to their superb performances over the last 4 years. They are very difficult team to play against with loads of pace and power upfront. Brazil will have to be vary of their defensive duties and Ecuador usually set up with deep defense and try hit on fast counter attacks. I am going with a scoring draw in this one.