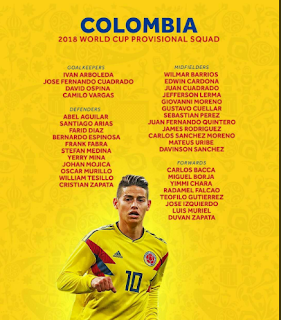 Colombia qualified as fourth place team in the South American qualifiers, they managed to do so by only 1 point as both fifth place Peru and 6th place Chile had 26 points. Colombia’s case is curious one, they are not as exciting as Brazil, not as star studded as Argentina and not as hardworking as Uruguay but they do have something about them in the major tournaments and they could go just as far as any of the other top three teams from continent.

Confirmed Colombia 23-Man Squad:  Jose Pekerman announced the final 23man squad for Colombia and that came with not many surprises. All big name players were selected in what could be last world cup for few of their star players.

Jose Pekerman was appointed back in 2012 and he has steady the ship helping Colombia to qualify for the World Cup 2014 where they lite up the tournament until couple of harsh decisions against home side Brazil got the better of them. Pekerman comes from Arsene Wenger school thoughts and he trust his players and their abilities. Very experienced coach, should get them to quarterfinal stages if they manage to avoid one of the big guns in round of 16.

Colombia usually start with a 4-2-3-1 system and its build around James Rodriguez creative abilities and Falcao’s goal scoring powers. However in world cup qualifying 18 matches they only managed 21 goals, not good enough considering some of the games are against rather easy opponents. However they do posses pace and loads of it on the counter attacks with Cuardrado and Cardona 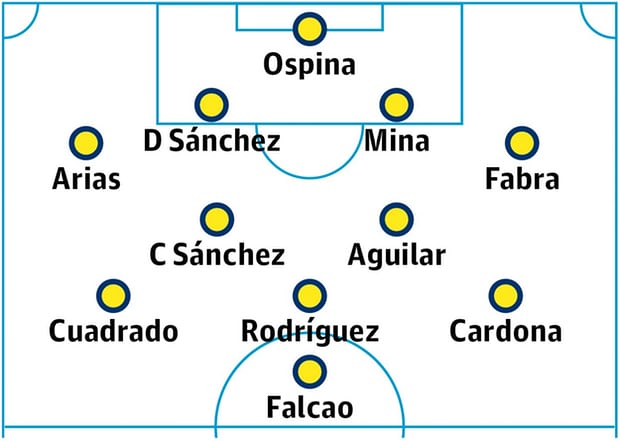 As far as the defense is concerned, they do have a very mean one at the back but questions marks over David Ospina’s goalkeeping abilities however that’s the best they got.

Colombia have a very straight forward group on paper but if they slip up in the opening game against Japan than it will be difficult to get through the group with both Poland and Senegal capable of nicking points.