CONMEBOL (south American football federation) and CONCACAF (North America FA) has unveiled the all new and specially designed Copa America Centenario Golden Trophy which will be awarded to this summer’s Copa America champions. 2016 edition of the competition will take place in United States and it will be the biggest in its history with 16 teams participating from two regions and the winner will receive not one but two trophies.

To celebrate the 100 years of South American football both CONMEBOL and CONCACAF worked together to arrange Copa Centenario where all South American national teams and 6 teams from other federations like North America will take part in what will be the biggest football event held in USA since 1994 and it will be the first time that Copa America will take place outside Latin America.

The new trophy features pretty much the similar design to the regular silver Copa America trophy only edition is more satin and glossy gold used on the curves.

The usual trophy was designed back in 1916 by Argentina jewelers and it was used till 2007 followed by a new version released for 2011 Copa America inspired by the original trophy.

While this year’s gold trophy is a on-off and will be awarded to winners alongside the regular trophy as celebrations of 100 years in latin american football. The new gold trophy features names of all countries participating and the map of both South/North America.

Chile who won the 2015 edition will be defending their title while Uruguay has won the most Copa America titles (15) closely followed by Argentina who has won 14 titles while Brazil has won 8. Below is the small history of Copa America’s original trophy. 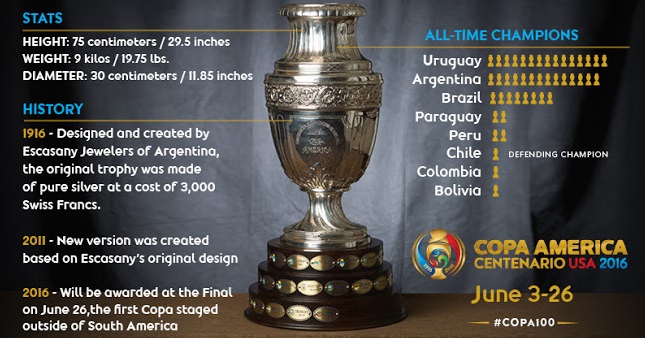 2016 Edition of Copa America also marketed as Copa Centenario will begin on 3rd June 2016 and the final will be played on 26th June. There will be 32 matches set to be played in 10 different venues across the US.