Confirmed Croatia 23-Man Squad: Croatian squad was announced on 04 June 2018. Below is the entire 23-man squad list which do have couple of surprise inclusions.

Croatia qualified for the world cup 2018 after, they finished 2nd on the points table of qualifiers after Iceland. They got an experienced head coach (Zlatko Dalić) who managed to football clubs from Asia and Europe. After leaving job of (Al-Ain) in 2017, Dalić signed for the new head coach of Croatia. He is hopeful that his side in the world cup, performed better as they did in qualifiers. The retired football player (Ivica Olić) will become assistant manager under (Dalic). 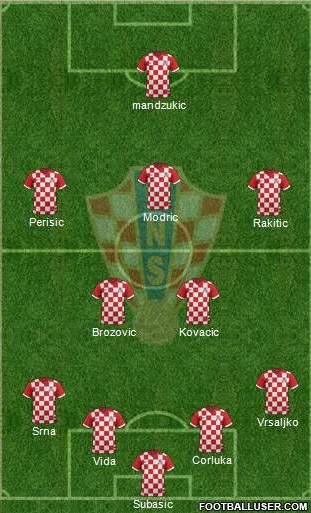 Possible Starting Lineup: Croatia are a very hard working team with some quality players in the midfield. We can expect the experienced trio of Modric, Brozovic and Rakitic to start in midfield with Perisic and Mandzukic playing upfront. They usually use 4-2-3-1 system and we might see Real Madrid’s Kovacic starting in deeper midfield role along side Brozovic.

A very experienced defense with Srna, Vida, Corluka and Vrsaliko and Subasic to to keep the goal.  Croatia are setup not to get beat and they rely on the pace of Perisic on the counter attacks.

Croatia drawn in the Group (D) of the world cup. Where they will face Argentina, Nigeria, and Iceland in their group games. Croatia open their world cup run from 16th June with the first match against (Nigeria).