UEFA Women’s European Championship 2017 starts on 16th July 2017 and will be played through 06 August 2017 in 7 different venues across Netherlands. A total of 16 teams will compete drawn into 4 groups of 4 teams each, top two from every group will qualify for the quarterfinals. The first match will be played between Holland vs Norway on Sunday, 16th July 2017 at the Stadion Galgenwaard, Utrecht. We will have live links of all Women Euro 2017 matches right here on this page.

There will be a total of 31 matches including 24 group games and 7 knockout ties. Group Stage finish on 27th July and we will have four quarterfinals on 29th and 30th July followed by two semifinals and the big final on Sunday, 06 August 2017 at the De Grolsch Veste, Enschede. Below is the list of upcoming matches in Women Euro 2017.

Upcoming Matches: There will be two matches every day from 16th July to 27th July and we will be updating this page with the latest schedule and results.

[ Live links of every Women Euro 2017 matches will be available 1 hour before the start of the game. We usually have several links in English coverage ]

UEFA Champions League season 2016-17 gets underway on 13-14 September 2016 with the opening round of group games. The draw for the Champions league group stage will take place on Thursday, 25 August 2016. On this page you will find live streams of every CHampions League and Europa League games right here. This will be the dedicated page which will have live links to every champions league game.

Eder extra time goal win the 2016 Euro title for Portugal as the beat hosts France in the final. Ronaldo was forced injured early in first half but Portugal defended resiliently as they wore down France and scored in second half of extra time to win the tournament.

So we have our final two teams who will be competing for the Euro 2016 title come this Sunday, 10th July 2016. Hosts France will take on Portugal at the Stade de France kicking off at around 21:00 local / 20:00 uk time. Both BBC One and ITV 1 will have live coverage of the game. 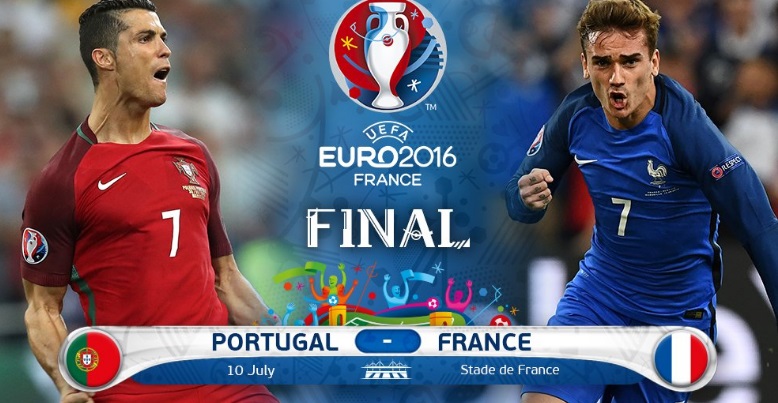 The final will be played on Sunday, 10th July 2016 at the Stade de France. The final game will be broadcasted both on BBC one and ITV 1 in the UK. If Wales qualify for the final, Welsh national tv S4C will also broadcast the game live in Welsh commentary.

Group stage matches will be played from 10th june to 22 June and after that extensive knockout stage begins with as many as 16 teams qualifying for round of 16. The final will be played on 10th July at Stade de France in Saint-Denis. Its all set for a massive summer of international football with two major tournaments taking place at the same time. It will all start with lavish opening ceremony just before the first fixture between France and Romania and ITV coverage will begin at-least 30 minutes before the opening ceremony.