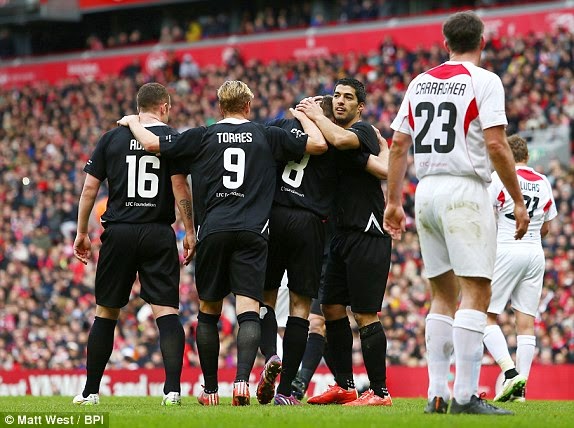 Steven Gerrard Scored two penalties for his team and here he celebrate with his former team mates Luis Suarez and Fernando Torres.

Liverpool stadium Anfield will host a charity game which will be played between Steven Gerrard XI and Jaimi Carragher Xi on 29th March 2015. Both players has already done the promotion stuff for the match and picked their star squad which are listed below and we get you all the information on how and when the game will be played and how you can see the match on TV and online.

The tickets for the match has already been sold out and you will have a packed stadium set to witness some of europe’s elite footballers lining up for special charity game. Official Liverpool TV called LFC TV and LFC TV Go will broadcast the game in UK and worldwide.

LFC TV GO: You can subscribe to LFC TV GO through official website of Liverpool, it will cost just £1 to get a 24 hour pass and whole £1 will go to the official Liverpool charity.

Here is the full squads for both the XI. The squads has been confirmed and there will be unlimited substitution rules for the game.