Manchester City absolutely hammered Chelsea from kickoff to the final whistle could have scored 5-6 goals today but they will be happy with 3 goals and most importantly the performance which sent out a statement of intent. 2 matches, 6 goals, 2 cleansheets and top of the table that’s exactly what the doctor ordered. Chelsea’s day was summed up when Jose Mourinho replaced John Terry at the half-time (which has silent messages to chelsea board) and it was the first time in 177 games under Mourinho that Terry was replaced.

Jose Mourinho has been critsiced after his touchline antiques with his medical staff while his team lacks innovation as they failed to bring in any major signing during the summer.

Chelsea Injuries & Suspenstions: Courtois (three match ban), Oscar (doubtful)
Asmir Begovic to start in goal as Courois is suspended due to straight red against Swansea City while Oscar might also miss out after failing to train enough during the week. Diego Costa set to start upfront while rest of the team should remain the same. 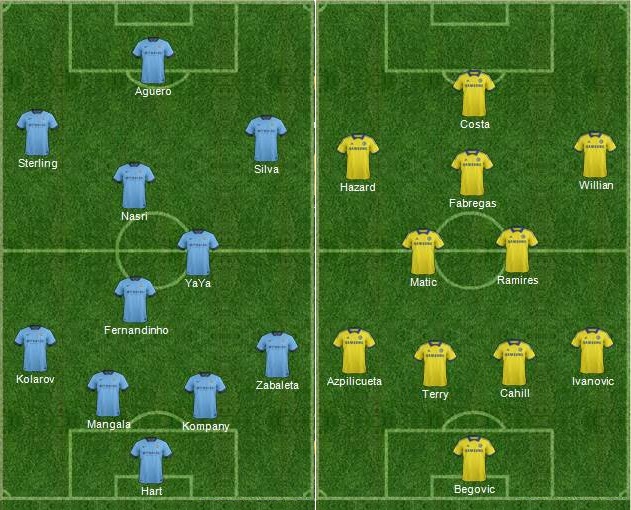 Watch Manchester City vs Chelsea Live Streaming: We will have the SkySports live coverage of Chelesa vs Man City on sunday, 16th August 2015. 1 hour before the kickoff plus couple of alternative streaming links available with NBC (US) coverage and SportsNet (canada) links. The kickoff time of the match is 16:00 uk time.

Match Predictions: Chelsea will be going into the game as underdogs after started their 2015-16 season with a surprisingly bad form and a very mediocre pre-season tour of US as well. City are unbeaten against Chelsea in the last three matches and both of the 2014-15 season fixture finished 1-1. City are likely to start with Sergio Aguero and he might turn out to be the difference between the two teams.

Incentives are high for this game and City will most definately go for a win while we can safely assume that Mourinho will be happy with a draw and might park the bus which set this one up for a classic. I am going with a draw in this game as both teams will be looking to avoid defeat and they might cancel each other out.