Premier League 2014-15 season is coming to its Business end of the season and there is alot of play for at the top of the league and in the bottom half as well. Chelsea are almost certain to be crowned champions while highly coveted 2,3 and 4 place in the league are still up for grabs with 4 teams fighting it out for the 3 position while at the bottom we have 6 teams in the dog fight of premier league survival battle.

Angle Di Maria is not having the best of times in Manchester United shirt but that did not stop fans to buy his name on the back of Manchester United kits throughout this season. He is by far the highest shirt seller since september 2014 and almost 1 in 10 fans in stores wants his name on the back of their new shirt. So here are some statistics which are likely to make Di Maria happy.

As far as the teams are concerned Manchester United are by far the highest shirt sellers in Premier League with over 25% of total shirts sold since September 2014. Chelsea comes second with 12% of the totals shirts sold since the start of the season.

United’s new kit supplier “Adidas” with new deal coming into play from the next season will be happy with the United shirt sales & demand. United signed a massive 75 million gbp a year.

Note: the numbers above were published by one of the biggest sports distribution network in Uk called “Sports direct” here is a small infograph. 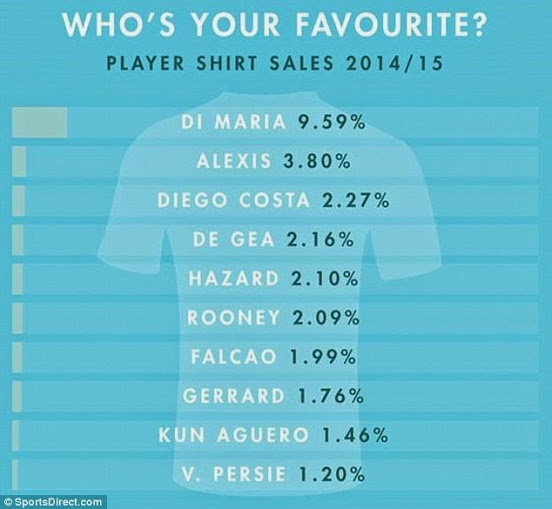