Premier League 2015-16 will get underway on 08th August 2015 with defending champions Chelsea heading into the new season as slight favourites compared to other three potential title challengers in Man City, Arsenal and Manchester United. Chelsea has not made any major signing in the summer so far apart from letting Petre Cech join Arsenal and their continues persuit of Everton’s young defender Stones but they did bring in Rademal Falcao on season long loan from AS Monaco to fill the gap left by Drogba. We take a look at 4 title challengers and predict how the Top 4 race will shape up during the course of the season.

Chelsea are odds on favourites to retain Premier League title but it should be a lot more closer than last season when Chelsea won the league quite comfortably and strolled home with ease in last few months of 2014-15 season. Diego Costa’s fitness and form will be the key for Chelsea and if he remains fit and keep his last season’s form he will be the key player for the blues.

If Jose Mourinho can turn around Falcao’s confidence and form they will have two proven goal scorers in their very balanced squad for next 2-3 years. Teams like Arsenal, United and City will have to play superb and consistant football to match Chelsea’s ability to get results even without playing good football. They are favourites to retain the title with early Odds: 6/4.

United improved from their 7th place finish under David Moyes to 4th in the league under new manager Louis Van Gaal in 2014-15 season. He was not happy with the balance of the squad last season and their target was the champions league place which they achieved after rather difficult season where their top scorer was Van Persie with just 12 goals. In the summer United have moved quick to sign some quality players in Bastian Schweinsteiger, morgan schneiderlin, Memphis depay, Sergio Romero and Matteo Darmian. While they let go players like Van Persie, Nani.

United and Van Gaal are hoping that Wayne Rooney can rediscover his goal scoring form and play a central role alongside Depay and potentially one more new striker signing before the transfer window shuts. Now if David Da Gea is to move away from United they are likely to sign Ajax and Dutch keeper Jasper Cillessen which will somehow take a few points away from United which De Gea earned them single handedly last season. But they do have much more balanced squad this season and should do alot better than last season and I can see them pushing Chelsea for the title. 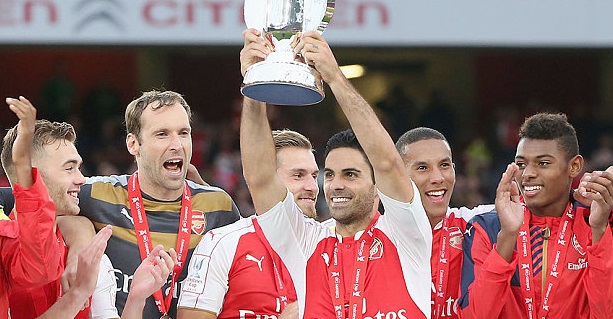 Signing for Petr Cech might turned out to be what Arsenal were lacking all these years without a premier league title. Arsenal tend to start brightly but fade away in december-january time which cost them a proper title challenge but with Cech and probably a top rated new striker combined with very quality unchanged squad from last season Arsene Wenger might just have a squad to go all the way and win the premier league.

Arsenal have players like Danny Welbeck, Walcott, Sanchez and Giroud who can score goals and player in multiple forward positions but realistically they need a top class centre forward to stand chance competing with Chelsea.

City were not good enough last season and their aging squad need fresher legs and City signed 20 year old highly rated Rahim Sterling for a massive GBP 49 million which will surely improve City but their star players like Kompany and Yaya Toure are not the same as they are aging and form as dipped since last season. Alot will depend on the form and fitness of Premier league top scorer Sergio Aguero and his goals if City were to mount a serious challenge for the title.

Since City are lining up a move for Pep Guardiola next season regardless of the results this season, Manuel Pelligrini might not have the full confidence from the players and board which will make his job alot more difficult. I can not see them challenging for the title next season unless they bring in couple of more highly rated young players like Kevin De Bryun and Paul Pogba.