Untill few years ago, legal streaming services were rare for all major sports. However, now we have loads of options to choose from to watch our favourite sports online legally but in most cases they cost a fortune. These days there are number of ways you can access live streams of Premier League but its rare to find a package which 1). Does not cost a fortune 2). have good quality and stable streams 3). offers more major sports rather than just one specific one 4). Most importanly its legal.

So we found a way for football fans to enjoy online streams offered legally by big network company and it does not cost a fortune and comes with many other top european league and other major sports coverage.

Online streaming service called “DAZN” bought the online streaming rights for Premier League in Canada. They also offer other big european league coverage like La Liga, Serie A and Bundesliga at just $12.5 CAD per month (Approx £7.70 and under $9.4 USD). All you would need is access DAZN service from Canada (Canadian IP). So if you are in Canada we highly recommend this service. The best part is event if you are not in Canada you can still subscribe to the monthly package from anywhere in the world. All you would need is to get an Canadian IP adress which can be achieved through buying a trusted VPN account at a small price and you are good to go.

So lets say you are in UK but can not afford to buy Sky or BT Sports packages or you would like to access saturday, 3pm kickoffs you can just simply buy an VPN and signup at DAZN Canada and watch all the premier league games live legally. The most important ingredient here is the VPN account costs around $5 to $10 a month.

We recommend ExpressVPN, which is without a doubt the single best VPN out there for streaming live sports. We tested ExpressVPN heavily during world cup and it was as smooth and fast as you can get – helping you not only get IP/severs in any of the top countries like UK, US, Australia, Canada,
Germany etc. but also keeping you anonymous. With ExpressVPN, your Internet Service Provider (ISP) won’t know what files or websites you visit. It also won’t keep any logs unlike some other lower-tier VPN providers.

ExpressVPN (Recommended) Leading provider of VPN sercies, ExpressVPN comes with easy setup and it won’t effect your internet speed whatsoever. Their smartplay tech enables high speed streaming and very useful for online stream in good quality. Tip: You can currently get a 49% discount if you buy a 12 month package, which comes with 3 extra months free – an unbeatable deal letting you watch the games all season.

Remember once you switched on expressVPN you have digital privacy and you can pretend to be in another country and your ISP won’t have a clue what you upto online. Setting up your VPN is the first step towards getting live premier league action legally online.Now that you have done the important part of setting up VPN, you would need to know what are the options available for you to get your Premier League live action sorted. Below are some of the countries/networks showing every premier league game online and we will discuss the best option available for you plus all other major networks available after you have switched VPN on.

One of the best options available for you to watch Premier League every game, every weekend is middle-east only service “beIN Sports connect”.  You can pay around $18 a month and get access to every premier league game live, even the Saturday 3pm kickoff which are not available in the UK. You can sign-up for an yearly account which will cost you $180 ($15 a month) only and you get almost every major European league and Champions League live throughout the year. What more ? every other major sport like formula 1, tennis and some high profile boxing fights as well.

How To Connect beIN Sports via VPN:

Note: For some reason if you are located in Europe, the US method described below may be a bit better connection-wise; consider it if you have a bit more budget.

Watch Premier League Live With NBCS (US Coverage) via SlingTV:

NBCSN has the exclusive premier league rights in the US and they broadcast all 380 matches live on TV and through their online platforms. Their coverage of premier league is second only to Sky and BT in the UK but the american audiance get to watch all 380 matches in a season unlike only 160 odd in the UK. However NBCSN is only available with cable and you would need subscription.

But not to worry, if you are happy with american coverage you can subscribe to online service called “SlingTV” which has 40 US cable channels in total including all NBC network. SlingTV subscription costs around $25 a month and with that you get to watch not only premier league but other major leagues and sports as well. You’ll want to choose Sling BLUE for NBCSN

How To Connect SlingTV via VPN:

Well this one is rather expensive considering majority of Saturday games won’t be shown live on Sky or BT Sports in the UK. But if you still prefer UK coverage of Premier League, you need to either subscribe to SkySports or BT Sports monthly package. (easily possible with VPN) but there is a better option with NowTV where monthly, weekly and daily packages are available costing £33.99, £12.99 and £7.99 respectively. 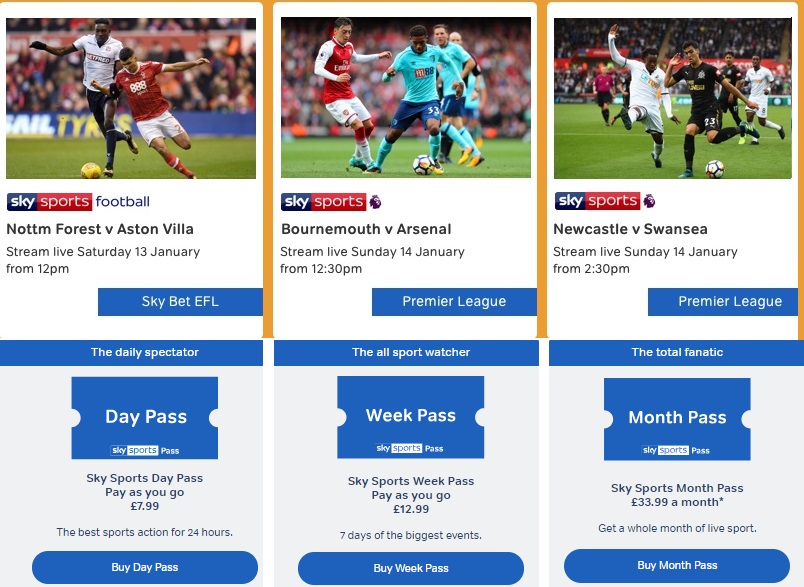 So now you know some of the international broadcasters’ online streams which you can access
legally with a VPN. Below is a list of all the networks (some of which we did not mention yet). It all
works the same: Buy a VPN subscription, connect to the desired country, head to the networks’
official website, buy the sports package with Premier League live coverage and you are good to go
for the whole season.