Adidas will be releasing two stunning Germany kits for Euro 2016, the home kit comes in a classic style while the away kit features more a unique touch with reversible shirt. 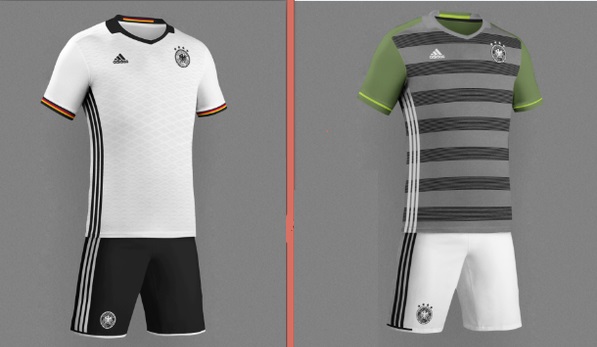 Germany won the 2014 world cup in Brazil and they will be favourites for the upcoming UEFA Euro 2015 championships in France next year. Adidas introduced a unique german flag V-shapped design for the home kit for Germany 2014 world cup but that all white look is history as Adidas will be unveiling more traditional main white design with a small round neck collar in black colour and three adidas stripes on the side of the shirt. The away kit will feature unique grey and dark grey colours with hoops design.

The unique thing about the new leaked kit is that Adidas stripes wont be used on the shoulders instead on the side of the shirt plus german flag colour lines on the end of sleeves is a nice addition. Rest of the kit provides a very classic look of a German football team shirt.

The shorts and socks of the home kit will be black making it a classic germany kit inspired by 1962 world cup. The all white Germany kit for 2014 world cup is pretty much a history now.

If adidas went with traditional with the home kit, they got bit over the top as far as away kit is concerned. The new leak shows new Germany away kit for the European championships next year. The away kit will be reversible and features two styles.

A totally-new reversible shirt comes in grey and dark grey combination wity hoops design on the normal side while if your reverse it it has more of unique colours with neon-green, grey and white combinations.

You can also see all other Euro 2016 Kits set to be released after the 12 december 2015 draw for the european championships.