Confirmed Sweden 23 Men Squad: Sweden announced their 23-man final world cup squad in May 2018 and there are not many surprises in the lineup.

Since 2016, its Janne Andersson who is team coach of Sweden. He guided qualification for Sweden via playoffs beating Italy over the two legs. Andersson is a very experienced coach having managed clubs like (Örgryte IS and IFK Norrköping) in native Sweden. Sweden’s win over Italy in the playoffs pretty much tell us everything about this team who can be very stubborn at the back and they do have some attacking flair upfront. 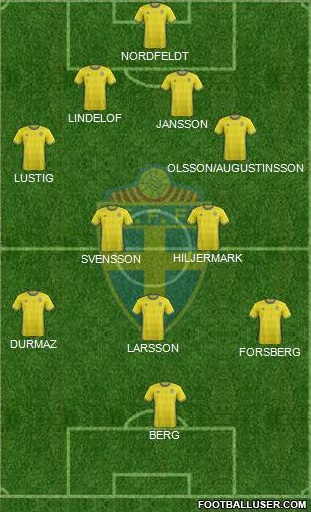 Possible Starting Lineup: Sweden are most likely to be with Ibrahimovic who announced retirement but has been hinting on a possible U-turn before the world cup. But its highly unlikely Sweden will consider him an option.

Forsberg is a main stay for this Swedish side, he has pace and trickery and will cause problems for any team. Berg is set to start upfront while Larsson and Durmaz are also in contention in what was a be a 4-2-3-1 system.

Swensson and Hiljermark are expected to form the central midfield while Lindelof and Jansson to play in central defense.

If we say Sweden is surprise entry in the world cup 2018 it might be not wrong the goal in the 61st minute of the match made it possible for Sweden to play in the world cup. Sweden drawn in Group of the Fifa world cup where they will play against opponents South Korea, Germany and Mexico.