Argentina are set to host Chile in the all important South American world cup 2018 qualifier on Thursday night, 23 March 2017 at the Estadio Antonio Vespucio Liberti in Buenos Aires. After 12 rounds in South American qualifiers, Argentina sit 5th in the table while Chile are just 1 point and 1 place ahead. Top 4 teams automatically qualify for World Cup while 5th place team will have to go through a playoff against either Asian or Oceana team. Argentina will be hoping to get the better of their boggy team Chile and get themselves into top 4 positions.

Chile and Argentina have played each other quite frequently over the last two years and Chile defeated Argentina twice in the final of Copa America (2015 and 2016) on penalties to deny Messi and co any silverware. However Argentina defeated Chile earlier in the qualifiers back in March 2016 when they beat Chile 2-1 thanks to goals from De Maria and Gabriel Mercado.

Match Preview: Argentina are undoubtly the best team in South America at the moment and probably the best in the world with the kind of form they have shown over the last 4 years. This will be their third consecutive major final and they will be looking to finally win the silverware which has eluded them since Lionel Messi started playing for Argentina. Chile however will be confident after string of great results in quarter final and semifinals.

Last time these two meet was back in June 2016 in the Copa America final in USA and after a very competitive match it was decided on penalties and it was Chile who ended up victorious.

Team News and Possible Lineups: Chile will be without Jara who is suspended for atleast 4 matches after his antiques against Uruguay while Eduardo Vargas and Alexis Sanchez are expected to start upfront for Chile.

Argentina are likely to go with the same starting lineup which took the field against 6-1 win over Paraguay. Segio Aguero is expected to start upfront with Di Mara, Pastore and Messi in attacking midfield roles while Javier Mascherano and Lucas Biglia should start in defensive midfield roles. Here is how I expect both teams to line up at the kickoff. 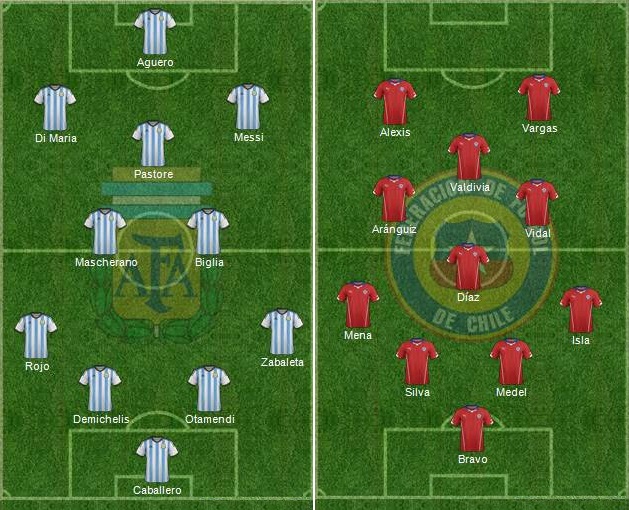 Match Predictions: 2 Months ago when I wrote the Copa America predictions blogpost, I predicted a final between Chile vs Argentina so here we are as both teams qualified for the finals undefeated and probably the two most compact units in the competition so far.

Preview Match Reviews: Like we mentioned before these two have meet twice in the Copa America finals in 2015 and 2016 and on both occassions Chile won the tournaments on penalties. 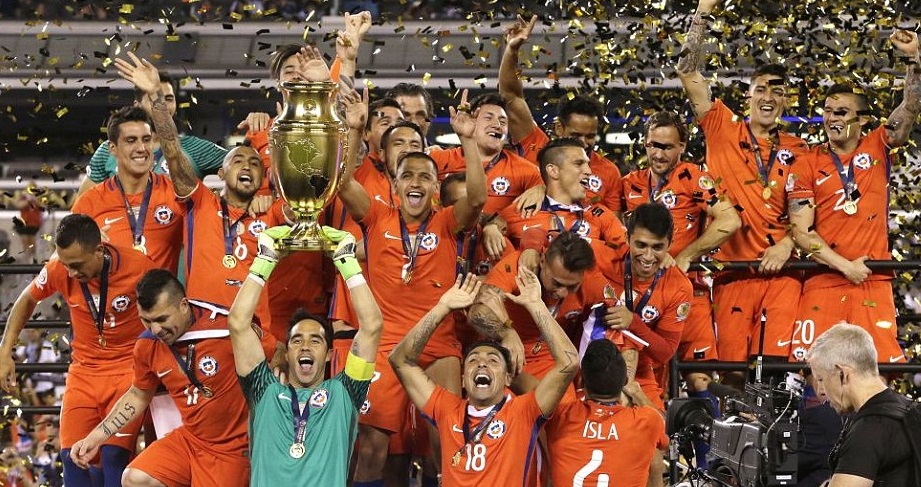 Argentina and Chile meet in second consecutive Copa America final on Sunday night, 26th June and it turned out another competitive game at the Met Life Stadium. Both camps complained just before the kickoff about a very narrow pitch, regardless match went ahead and both teams took the game to each other. Some feisty challengers early on set the tone and referee to take control of the game. Marcelo Diaz saw his second yellow in 28th minute and got sent off leaving Chile to play around 60 minutes with 10 men but Argentina missed a couple of chances before Marcus Rojo also got sent off with a straight red.

Lionel Messi has sensationally quit international football for Argentina. His camp announced the retirement news after the game which clearly had a major impact on Messi who failed to control his emotions after the game. 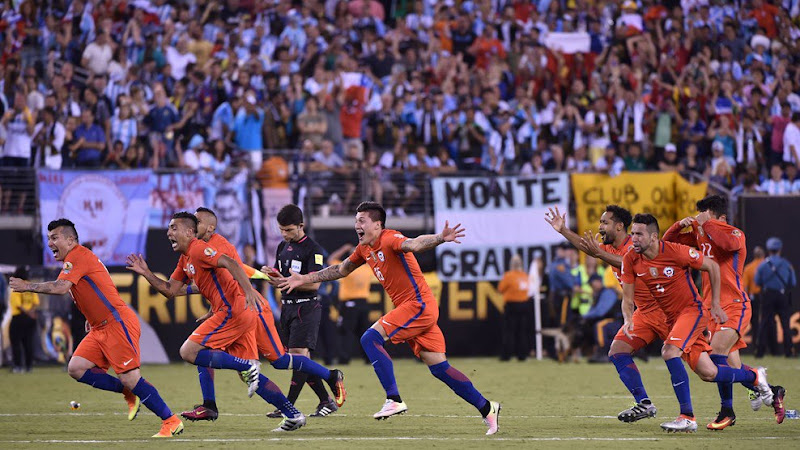 Argentina 0-0 Chile
[ Copa America 2016 Final ]
28′ [ Two yellow/red ] Marcelo Diaz got his marching orders in 28th minute after picking up his second yellow card in the game.
43′ [ Straight Red ] Marcos Rojo lunged in dangerously on Vidal and referee pulled up a straight red taking the game back to equal terms.

Lionel Messi was closely marshaled throughout the game by Chile defense as he failed to live up to his usual standards. He also missed the penalty in shoot-out handing advantage to Chile.

Gonzalo Higuain missed a sitter in first half after a break away move and that was one of several chances for Argentina to take the lead before both teams got 1 player sent off. 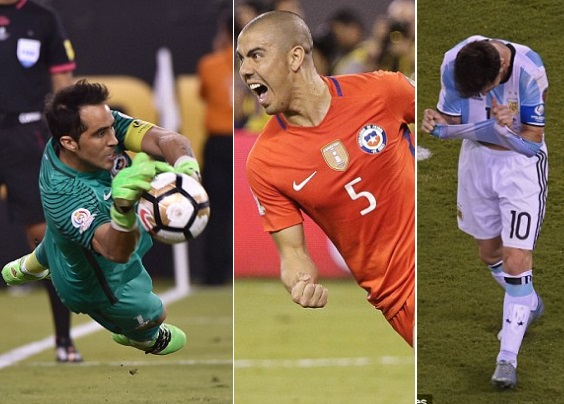 Heber Lopes the final match referee lost the plot and the control over the game in early stages as the tackles flew in. From than on it was just matter of minutes when one of the teams were going to see the red. Thats exactly what happened as Marcelo Diaz saw two yellow in matter of 15 minutes while Marcus Rojon was got a straight red just before the break. 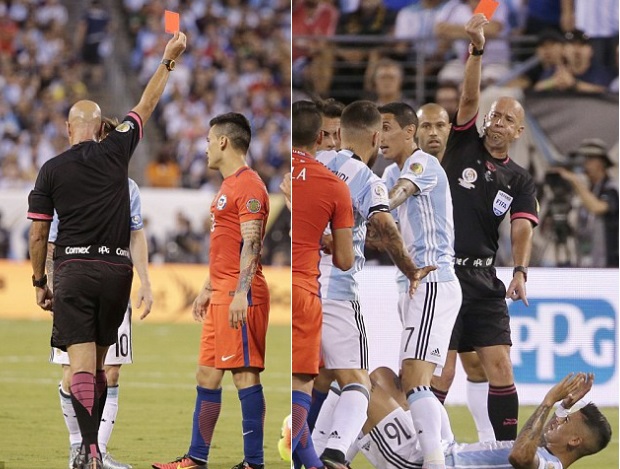 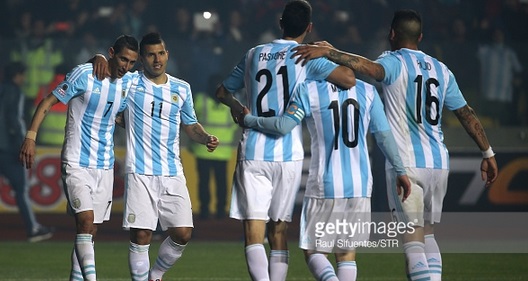 As far as the final is concerned there are no clear favourites because the advantage Argentina has atleast on paper in terms of their start quality is canceled out with the huge home support Chile will have for the finals. So this game could go either way. Looking at the past records Chile has played 4 copa america finals and never won it yet while you can not expect Lionel Messi and company to lose two back to back major finals. All these players were part of World Cup 2014 heart-break so they have a point to prove and what better way to book place in the final beating a difficult opponent in Paraguay all ends up ? So I am going with loads of goals and a 3-2 win for Argentina. Let me know your thoughts, predictions and what do you expect in the final by commenting below in the comments sections.

Chile broke hearts of Lionel Messi and company as the won their first ever Copa America title which came as the result of penalties in the 2015 final.

Chile defeated Argentina in the final of 2015 Copa America to win the regional south america competition for the first time in 5 finals, the game itself turned out to be another close game where both teams canceled each other out in the normal 90 minutes plus 30 minutes of extra time football.

Argentina started the stronger creating several chances in the opening 45 minutes but Chile looked more dangerous after the break. Angel Di Maria limped off injured in the first half. Chile hold their nervous better as they won the penalty-shootout 4-1.

Lionel Messi will have to wait atleast another 3 years to earn another crack at finally winning a major trophy with his national side. Messi has been pretty solid in the entire competition but Chile had a superb game plan to keep him quite in the final. 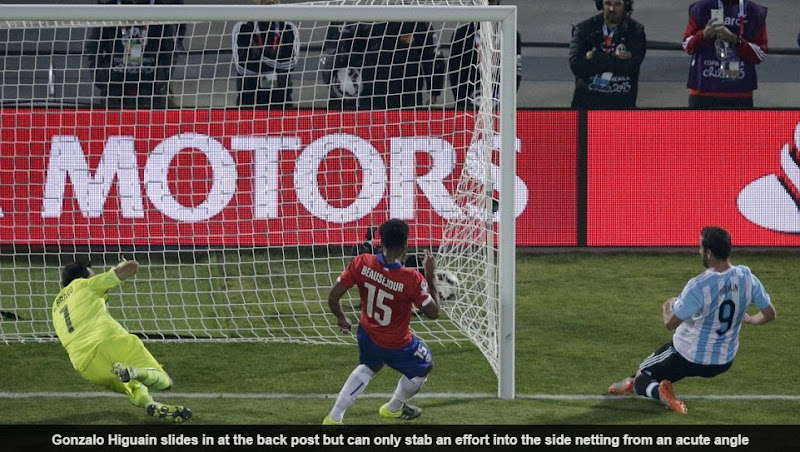