Arsenal defeated Aston Villa in the final to win their 2nd back to back FA Cup, Theo Walcott opened the scoring for gunners just before the break while Alexis Sanchez made it 2-0 just after the half time and Per Mertasacker made it 3-0 and sealed Arsenal’s only silverware of the season and second in as many years.

Arsenal started the first half stronger of the two teams and they looked threatning going forward, Villa setup to play on the counter attacks but they lacked that final ball and composure in the final third.

First goal came when Theo Walcott switched to left flank and a glancing header from Alexis Sanchez sent him free on goal and english forward did not make any mistake putting the ball in the back of the net with a fine near post finish. 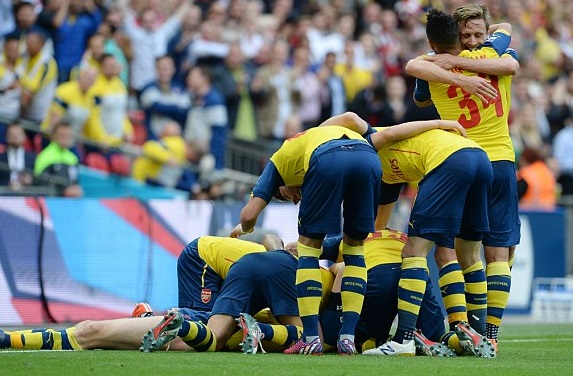 Arsenal doubled their lead 5 minutes into second half when Alexis Sanchez recieved the ball on the left side of the box, cut inside took couple of neat touches and produced a good shot which went right past Shay Given and end in the back of the net. Arsenal 2-0 and looked like game set and match. Given should have done a bit better with his effort but this was coming as Alexis Sanchez had too much time on the ball.

Before the match it was all about how Per Mertaschker mark Christian Benteke to keep Villa’s only real hope at bay, not only Mertasacker did a great job in keeping Benteke quite but he got the better of Villa striker, who was marking him on corners, and scored with a great header to make it 3-0 and win Arsenal their second consecutive FA Cup title in two years.