Bayern Munich were in rampant mode this wednesday night when the hosted Arsenal in the fourth matchday of UEFA CHampions League group stage. Polish striker Robert Lewandowski scored the opening goal while Thomas Mueller made it 2-0 within first half hour. David Alaba and Robber scored either side of the break to pretty much end the contest before Olivier Giroud grabbed the cancellation goal.

Arsenal’s european season is in the smokes as Bayern Munich put 4 past them at Allianz Arena leaving Arsenal 4th in the group with just 1 win and three defeats in the opening 4 matches. Lewandowski, Muller, Robber and Alaba were on target for Bayern in what was a sweet revenge win for the bavarians

Earlier Match Review:Arsenal managed to win their all important champions league game against Bayern Munich at Emirates with Olivier Giroud scoring the opening goal of the game in second half after coming on as a sub.

Arsenal needed to win against Bayern Munich to keep their hopes of knockout stage qualification when they hosted Bayern at Emirates. Bayern Munich had more of the ball throughout the game (70%-30%) but it was Arsenal who looked more threatning going forward and occassional counter attack. Olivier Giroud came on as a sub and scored all important goal to win all three points for Arsenal. 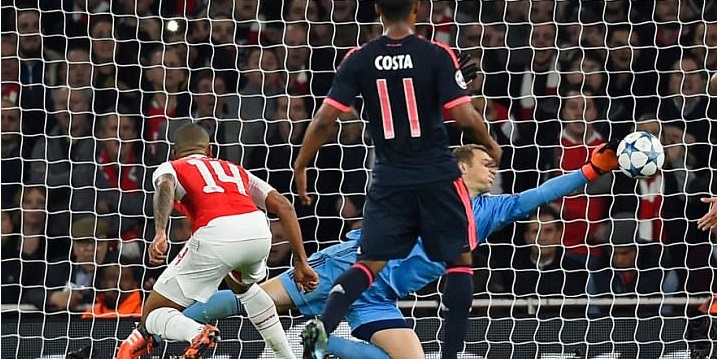 Mesut Ozil scored the second in dying moments of the game when Hector Bellerin raced down the right flank and squared it to Ozil.

Arsenal vs Bayern Preview & Team News: Arsenal has kind of turned their season around after two devastating defeats in champions league and since than they have beaten Manchester United and Watford with 3-0 scoreline. The last time these two teams meet in Champions League Bayern Munich won the game at Emirates while Arsenal beat Bayern at Allianz Arena but eliminated on away goals. Both teams have some injury worries going into the game with Bayern Munich without the likes of Mario Goetze (ruled out for months after getting injured on international duty) Holger Badstuber, Benatia and Kirchhoff. 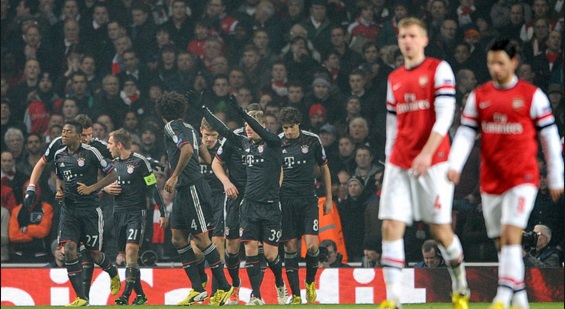 Bayern Munich will be happy with the progress made by Arjan Robben who has been getting some game time to get back to full fitness and might feature against Arsenal. Thomas Muller and Robert Lewandowsky are in great goal scoring form and we can expect both of them to lead Bayern attack.

Arsenal on the other hand has Welbeck, Wilshere and Rosiscky sidelined with longterm injuries but they made it through the international break and Watford game without any further injury woes. Olivier Giroud, Walcott and Sanchez are expected to lead the forward line for Arsenal with Cazorla, Francis Coquelin and Mesut Ozil playing in midfield roles. This is how I expect both teams to lineup for the Tuesday night encounter. 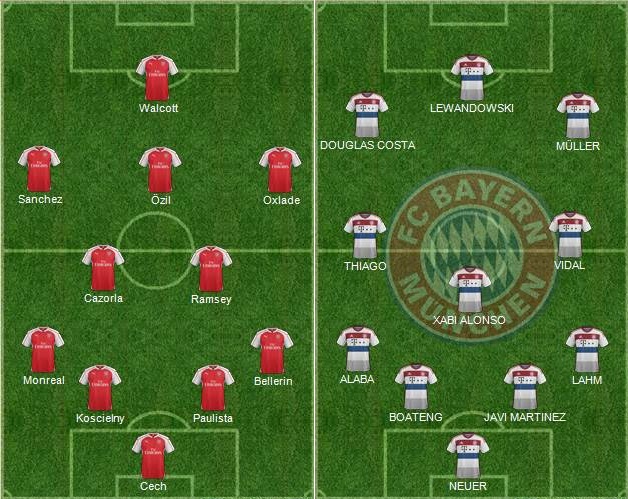 Match Predictions: Robert Lewandowski has scored 12 goals in last 6 matches for Bayern Munich and he will be the main goal scoring threat for Bayern Munich. Douglas Costa is a menace on the left flank while Bayern has goals from Muller, Vidal and even Thiago from midfield. Arsenal will have to be at top of their game to stop this Bayern Juggernaut and they prepared themselves for these two ties against Bayern with best possible results against Manchester United and Watford.

Sanchez is the main goal scoring threat for Arsenal while its Mesut Ozil, Cazorla and Ramsey have to take more responsibility in midfield with or without the ball if Arsenal were to have any chance of beating Bayern Munich. Bayern are playing so far and on a hot winning streak at the moment I just feel law of average will catch up to Bayern and they have to falter at some stage. I am going with a optimistic 2-1 win for Arsenal in this one.