Arsenal are set to take on AFC Bournemouth in the premier league game on Sunday, 13 January 2018 at Dean Court Stadium. Huge game for Arsenal are being left behind in the top four race and if they drop points again it is hard to see them catching up with the top 4 teams in the league. It will be interesting how Arsene Wenger lineup on Sunday with all the rumoures about Alexis Sanchez eminent departure. The game will kickoff at around 13:30 uk time and we will have live links right here plus match highlights.

AFC Bournemouth 2-1 Arsenal Highlights
[ Premier League 2017-18 Match ]
52′ 0 – 1 Hector Bellerin scores after he was sent through on goal by Iwobi’s brilliant pass and Bellerin slotted home as Asmir Begovic failed to stop the low shot.
70′ 1 – 1 Callum Wilson made it 1-1 on the day in 70th minute and from than on Bournemouth looked like a real threat.
75′ 2 – 1 Jordon Ibe made it 2-1 for home side.

Preview:Arsene Wenger is under massive pressure after collecting only three points off first three games losing twice already this season against Stoke City and Liverpool. Another defeat will make it the worst start for Arsenal in something like 35 years and Wenger will be keen to avoid such scenario.

Hector Bellerin is still out injured which means another chance for Carl Jenkinson in the back four with Monreal, Mustafi and Koscielny. Petr Cech should return after being benched in the Champions League game on Wednesday. Bournemouth on the other hand has played some good football and are not coming into this game under any sort of pressure which might prove pivotal. This is how I expect both teams to lineup: 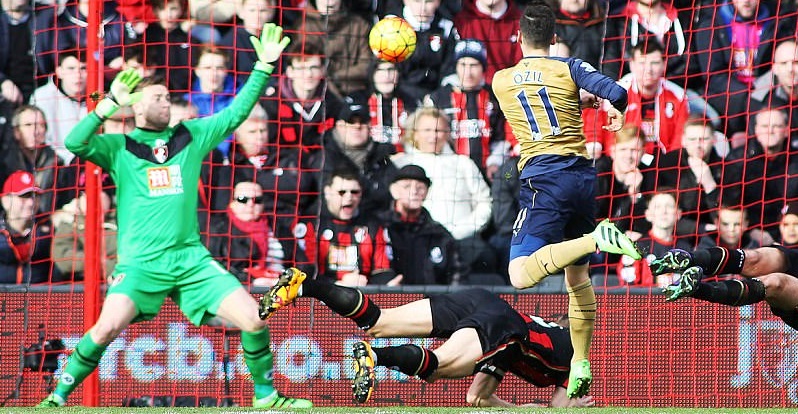 Last time these two meet was back in February where Arsenal ran out 2-0 winners thanks to goals from Ozil. On Sunday, Wenger will be hoping to avoid his teams typical november woes.

Team News & Starting Lineups: Arsenal are likely to replace Mertesacker with Gabrial in the starting lineup after horror show against Southampton’s Shane Long. While Alex Oxlade-Chamberlain might also get a nod in starting lineup with games coming thick and fast and Arsene Wenger need to rotate players. Bournemouth on the other hand will be missing Josh King but they will be boosted by the return of Lee Tomilson. This is how I expect both teams to lineup on Sunday afternoon.

Arsenal 2-1 AFC Bournemouth Highlights
[ English Premier League 2016-17 ]
12′ 1 – 0 Alexis Sanchez took advantage of terrible mistake at the back by Bournemouth and put Arsenal 1-0 in lead.
23′ 1 – 1 Callum Wilson brought Bournemouth back into it in 23rd minute as Arsenal started to feel pressure.
53′ 2 – 1 Theo Walcott scored just after the break to put Arsenal back in lead.