Its been more than two months when Arsenal rapped up their 2014-15 season with a impressive 4-0 win over Aston Villa in the final of 2015 FA Cup while Chelsea secure their third title under Jose Mourinho.

Arsenal defeated Chelsea 1-0 in the Community Shield match on sunday afternoon with Alex Oxlade-Chamberlain scored a stunner in 23rd minute to give Arsenal 1-0 lead which they manage to hold on to till the full time and started their campaign with first silverware and Arsene Wengers first victory over Mourinho in 14 attempts.

This will be the 14th time Arsene Wenger takes on Jose Mourinho and he is still to get off the mark as Arsenal has never defeated Chelsea under Jose Mourinho in any competition. Both sides are coming into this season on the back of a quite summer transfers as Arsenal’s major coup has been Petr Cech while Chelsea added Rademal Falcao on a season long loan from Monaco and both Cech and Falcao are expected to start for their respective teams.

Mourinho confirmed ahead of the community shield game that both Gary Cahill and Diego Costa will be fit for the match. Petr Cech is sure to start for Arsenal in goal but Wenger will be without last season’s top scorer Alexis Sanchez who has been given extended rest post Copa America 2015.

Here are the possible starting lineups for Both Arsenal and Chelsea, the confirmed team news will be available few hours before the kickoff on Sunday. 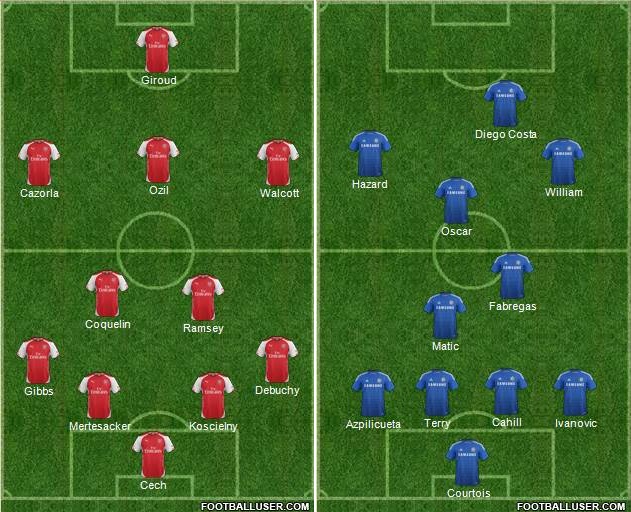 Looking at some of the statistics its hard to see Arsenal winning this game. Out of the last 5 times only 1 time a FA Cup winner side has won Community shield which was last year when Arsenal defeated City. The last time both teams played in community shield game Chelsea won the game 2-1 back in 2005. Arsene Wenger has never beaten Mourinho in last 13 attempts losing 7, drawing 6.

Although being the first game of the season and players are not into full gear we can expect anything in this game, Arsenal had a superb pre-season so far but they will be without their x-factor in Alexis Sanchez and Chelsea will be looking to get their season underway with a win making it a very evenly poised game. I can see this game going on penalties and Cech becoming a hero against his old employee getting Arsenal their first taste of silverway in 2015-16 season.

Match Highlights: We will place the extended match highlights of 2015 Community shield match right here after the game is over. so check back at around 17:00 uk time for full match highlights.