Arsenal kept their chances of qualification to next round of champions league in their own hands when they defeated Dinamo Zagreb by 3-0 with Mesut Ozil scoring first goal in 30th minute while Sanchez added two goals in either side of the break to guide Arsenal to impressive 3-0 win. Since Olympiakos also lost against Bayern Arsenal need to beat Olympiakos with atleast 2 goal margin and they will qualify for next round.

Its hard to believe that Arsenal are still in with a chance to qualify for knockout stages of the champions league if they can win both of their last two games and Olympiacos lose their remaining two fixtures including one agains Bayern and the last one against Arsenal on last matchday. Arsenal vs Zagreb will kickoff at around 19:45 uk time and BT Sports will have live coverage of this game in the UK. We will have live action of this match 1 hour before the kickoff with live links.

Arsenal vs Zagreb Preview & Team News:Arsenal visited Zagreb back in September 2015 on the first matchday of this season’s champions league and they lost the game where Oxlade Chamberlain’s own goal combined with Giroud’s first half sending off helped Zagreb to a surprising win. Arsenal will be without Francis Coquelin who has been ruled out for atleast 2-3 months and he joins treatment table with the likes of Wilshere, Welbeck. Arsenal might also be without the likes of Walcott, Mikel Arteta and Oxlade- Chamberlain for Zagreb game which kind of put Arsenal’s chances of a decent result at risk.

Possible Starting Lineups of Both Teams:
This is how I expect both teams to lineup, the confirmed starting lineups will be announced couple of hours ahead of the kickoff. 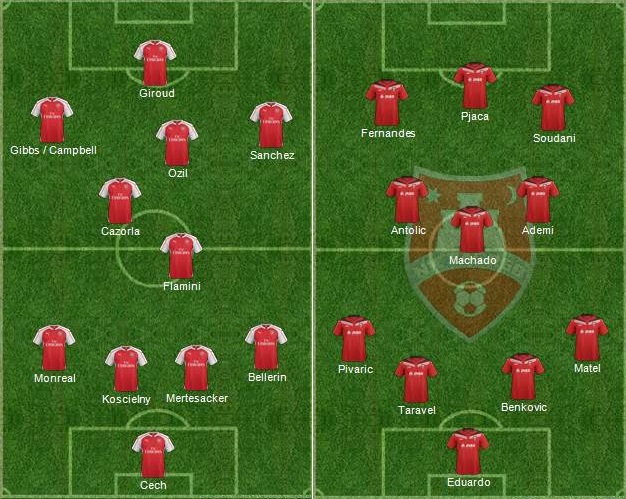 Predictions: Arsenal are coming into this game on the back of a terrible 2-1 defeat in the hands of West Brom but this is a must win game for Arsenal as their qualification to next round of champions league hangs by the thread. I think they will have enough fire power to get the better of Zagreb at Emirates and might just sneak into knockout stages with another win next month against Olympiakos.