Arsenal go top of the table with another superb performance against Everton winning the premier league game on saturday with 2-1 scoreline. Olivier Giroud first half header quickly followed by another Arsenal goal by Koscielny made it 2-0 before Ross Barkley scored just before the game to make the second half interesting.

Arsenal has been in absolute superb form since the international break and they continue their fine form against Everton in the premier league game this saturday evening with two quick goals in first half from Olivier Giroud and Laurent Koscielny who both scored within two minutes. But a goal from Everton younsgter Ross Barkley got the away side back into the match at the stroke of half time.

French striker Olivier Giroud continue his impressive run of form with another well timed header in first half while defender Koscielny added the second. Ross Barkley’s goal brought game back into the balance at 2-1 for Arsenal with second half turning out to be a very competitive action packed 45 minutes. Arsenal managed to hang in there to see of 2-1 lead and move top of the table. 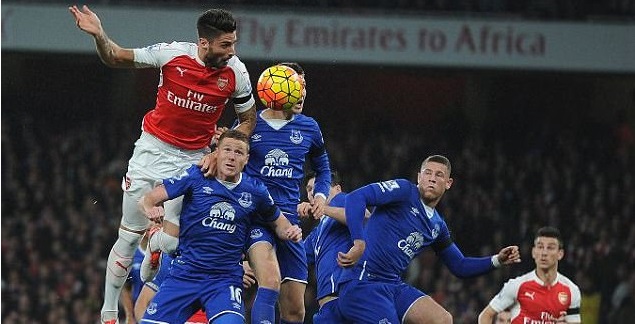 Arsenal vs Everton Preview: Arsenal has been in wonderful form of late winning three back to premier league games plus that all important champions league win over Bayern Munich which will go along way to get their european season on track. Their next assignment is an away fixture against Everton in a game where they are expected to struggle, but a win here will put them top of the table for the first time this season and they might stay top if United beat City. So there is alot of play for Arsenal while Everton will be looking for first win in three matches to keep their hopes of qualifying for europe next season.

Arsenal has some major injury crisis probably at the worst time possible with them in great form at the moment. Aaron Ramsey will join the likes of Jack Wilshere, Danny Welbeck and Thomas Rosicky on the sidelines while Mikael Arteta is stuggling to get fit. Wenger is also looking to rest key player Alexis Sanchez as he is playing non stop for last 3 weeks with Arsenal and Chile together. Olivier Giroud might also start ahead of Theo Walcott who has been in decent form but Wenger might want to use Girouds arial presense against a very physical Everton side.

Toffees on the other has some great news with Tom Cleverly, Steven Pienaar and Oviedo all likely to be in the squad while Leighton Baines is almost full fit to feature for Everton in coming weeks but not against Arsenal. This is how I expect both teams to lineup ahead of Saturdays kickoff. 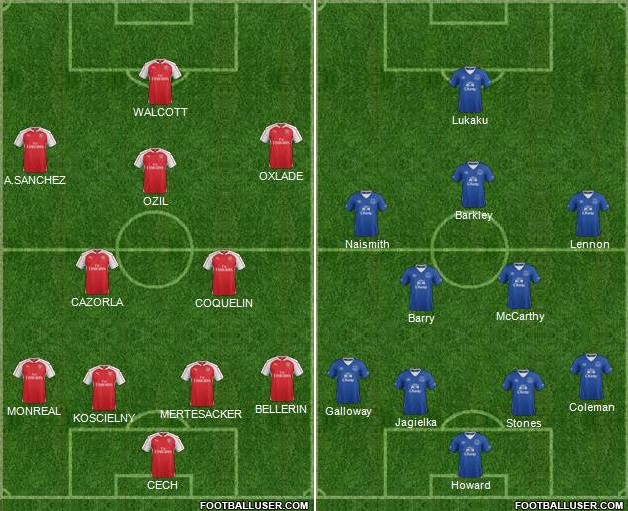