Arsenal are set to host Huddersfield Town in the Premier League game on Wednesday night, 29th November 2017 at Emirates Stadium in what should be a cracking game. Arsenal have turned their season around after slow start to the league campaign and now they are one of the most inform team in the league alongside Manchester City. 100% record at home is something Wenger can be proud of but they need to build on that if they were to challenge for the top 4 positions in the league. Huddersfield on the other hand were unlucky to get beaten by Manchester City over last weekend but they can be confident going into the Arsenal game.

Arsenal vs Huddersfield Town Preview: On paper Arsenal should sail through this game with the three points but we all know Arsenal can be unpredictable and even with the 100% record at home, Huddersfield can fancy their chances against this Arsenal side who can blow hot and cold. However 6 wins out of 6 home games so far has put Arsenal in a position where they can really build on and get that much coveted top four finish come the end of the season.

Huddersfield are playing incredibly well at the moment but their away form have been terrible to say the least where they have only won 1 game so far in the opening 6 away games losing 4 in the process. But this Arsenal game give them the oppertunity to get something out of this match and leave the rut of difficult games behind going into the festive period where they play quite a number of winnable games.

This is how i expect both teams to lineup on Wwednesday. Mesut Ozil is doubt which means Wishere, Xhaka and Ramsey to start in midfield while Sanchez and Lacazette to start upfront. 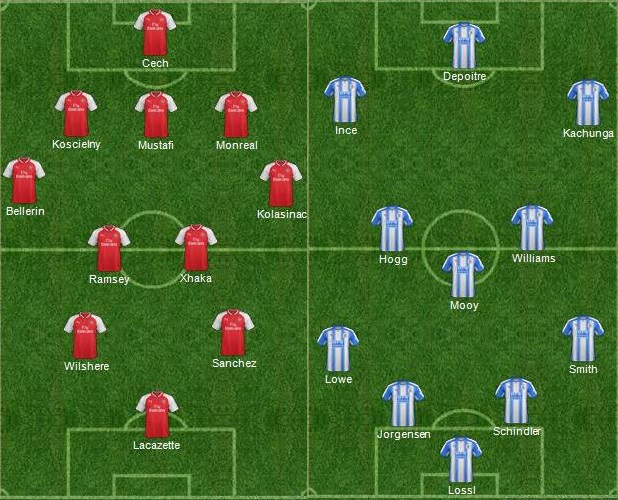 Match Predictions: Like we mentioned before, Arsenal will be odds on favourites to get all three points against Huddersfield playing at Emirates. But they do have tendency to pull off a surprise result just when it looks like they are putting their act together. I see Huddersfield to frustrate Arsenal at home but eventually Sanchez and co will break them down. I am going with a 2-1 win for Arsenal in this one.