Arsenal put a massive dent of Liverpools chances of qualifying for the champions league next season as they beat the merseyside club by 3-1 in the premier league encounter and overtook Man City to the second place in the league standings. Arsenal now have 63 points in the 31 games they have played while Liverpool have 54 of 31 matches in the league.

Arsenal started the game at Emirates in superb fashion, taking the game to Liverpool and put them underpressure from the kickoff. It took 37 minutes for home side to open the scoring through unlikely source in Hector Bellerin who scored after constant Arsenal pressure in the Liverpool box.

Minutes later German international Mesut Ozil curled a beautiful freekick in the far post to make it 2-0 while a third from Alexis Sanchez made it 3-0 at the break and game looked pretty much done and dusted for Liverpool. 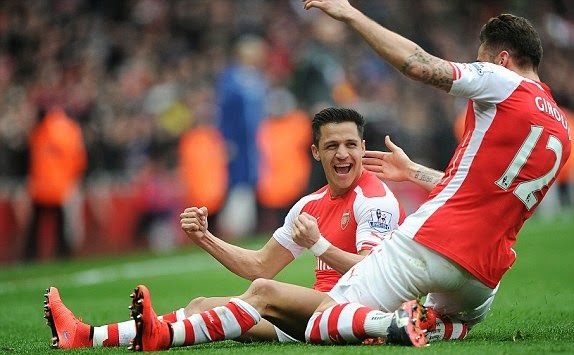 All the pre-match focus was on Raheem Sterling who pretty much failed to deliver and did not make any notable contribution for Liverpool. Second half Liverpool were a notch better but did not trouble Arsenal keeper David Ospina enough.

Sterling won a penalty when Bellerin took him down in the box and Jordan Henderson converted from the spot to make last 15 minutes interesting.

Emre Can saw second yellow of the day and got his marching orders but the game was already lost and Liverpools chances of making it to the Champions League pretty much depend on United and Arsenal’s potential slips in the remaining 7 games.