Arsenal will play Stoke City in the premier league game on Saturday, 19 August 2017 at Bet365 Stadium. It will be the second premier league game for both sides and Arsenal will be looking to secure build on that impressive 4-3 win over Leicester City on the opening day. The game will be starting at around 17:30 uk time and BT Sports will have live coverage in the UK while NBCSN will broadcast the game live in the US.

Stoke City vs Arsenal Preview: Stoke City started their 2017-18 campaign with a defeat against Everton with Rooney scoring the only goal of the game. Stoke will take heart from Leicester City 3 goals against Arsenal and will try to make it difficult for Gunners to score. Watch full match highlights of the game between Arsenal vs Stoke right here on this page.

Stoke City 1-4 Arsenal – May 2017
[ Premier League 2017 Match ]
42′ 0 – 1 Olivier Giroud scored the opening goal for Arsenal which helped them take the commanding position in the game.
55′ 0 – 2 Mesut Oezil scored second for Arsenal in second half.
67′ 1 – 2 Peter Crouch momentarily put doubts in the game but Arsenal quickly regained the lead and scored another late in the game to secure comfortable 4-1 win.

Arsenal will be looking to get another win in difficult away game to keep their noses in the title race in front. By the time Arsenal-Stoke match kickoff Manchester City might have joined them at the top as they will play against Crystal Palace on Saturday. Arsenal failed to win their very winnable game against struggling Liverpool when they drew 3-3 at Anfield in midweek which kind of puts pressure on Arsenal going into the Stoke match. The last time both teams meet was back in September when Arsenal ran out 2-0 winners with Walcott and Giroud scoring goal-a-piece to earn 2-0 win for Arsenal.

Arsenal don’t really like visiting Britannia stadium having only won once in the last 8 premier league games at this stadium against Stoke City. Three points are crucial in such games if a team were to go on to win the premier league and this is exactly the time of the season when Arsenal’s form deteriorate, Wenger will be hoping otherwise of course

Possible Starting Lineups: Arsenal are likely to start with packed midfield where Ramsey, Ozil, Cazorla and Coquelin are expected to start with Giroud spearheading the attack after scoring 2 goals in the midweek against Liverpool. Stoke City will continue to use their fluid forward line of Bojan Krikc, Arnoutovic and Shaqiri. 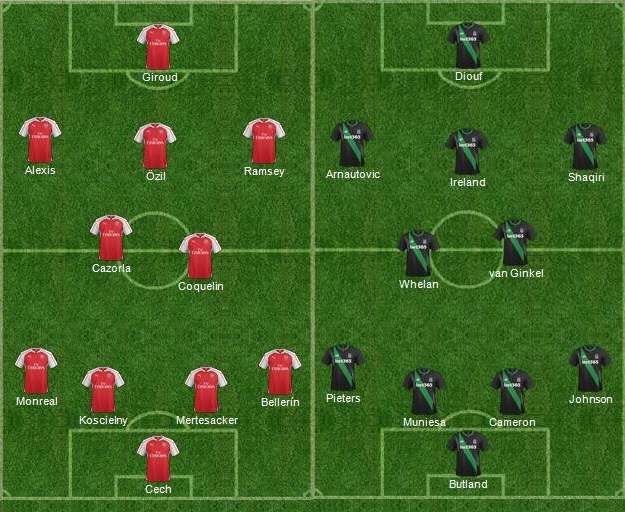 Match Predictions: Hard to see anything but a win in this game for Arsenal, Stoke City have been decent at home but considering they are already safe from relegation they don’t have much to play four. I am going with a comfortable Arsenal win in this one.