Arguably the biggest north London derby in recent decade took place at White Hart Lane on Saturday afternoon and it turned out to be a belter. Arsenal needed a win to stay in title race while Spurs could go top of the table with three points. Arsenal took the lead through Aaron Ramsey in first half but Tottenham turned things around in second half with Toby Alderweireld and Harry Kane scoring two goals in as many minutes to get Spurs in lead. But a late goal from Sanchez earned a massive point for 10-men Arsenal.

Harry Kane’s game was special as he caught David Ospina off guard with a long range curing effort from the left flank. Arsenal however hit back even with 10 men when Alexis Sanchez scored with a neat finish when played through. 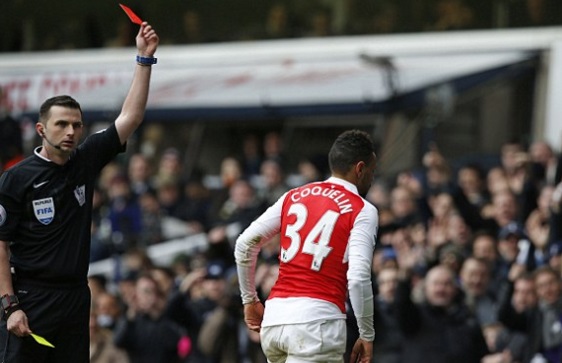 Arsenal vs Tottenham london derby lived up to its expectations as it turned out to be a very exciting match. Arsenal took the lead early through Aaron Ramsey superb flick finish but Arsenal had Coquelin sent off just after the break allowing Tottenham a way back into the match. Alderweireld and Harry Kane scored within two minutes of each other to put Spurs 2-1 up.

Preview: Tottenham is bookies favourite to win the title although they find themselves 3 points behind current leaders Leicester City. If Spurs can beat Arsenal on Saturday they will go top of the table and 6 clear ahead of Arsenal and that will be a massive boost for North london club who has kind of sneaked into title race. Under manager Mauricio Pochettino guidance Tottenham has became a very well oiled machinery and they depend alot on their high pressure tactics for full 90 minutes.

Arsenal on the other hand has kind suffered horrific couple of weeks where they lost against Barcelona in Champions League followed by 0-0 draw against Hull City in FA Cup. A 3-2 defeat against a second string United and Swansea City stunned Arsenal at Emirates with 2-1 win to put huge pressure on Arsenal leaving them with a must win game against Spurs or they can say goodbye to their title challenge for another year.

Team News & Lineups: Arsene Wenger will be without Petr Cech and Laurent Koscielny who suffered injuries in Swansea game David Ospina to start in goal while Hector Bellerin, Per Mertesacker, Gabriel Paulista and Nacho Monreal to make back four. Coquelin, Mesut Ozil and Aaron Ramsey to play in midfield with Sanchez, Walcott and Giroud to start upfront.

Spurs are likely to be without Captain Jan Vertonghen for the Arsenal clash while Alderweireld and Wimmer to start in central defense roles alongside Danny Rose and Walker in full back positions. 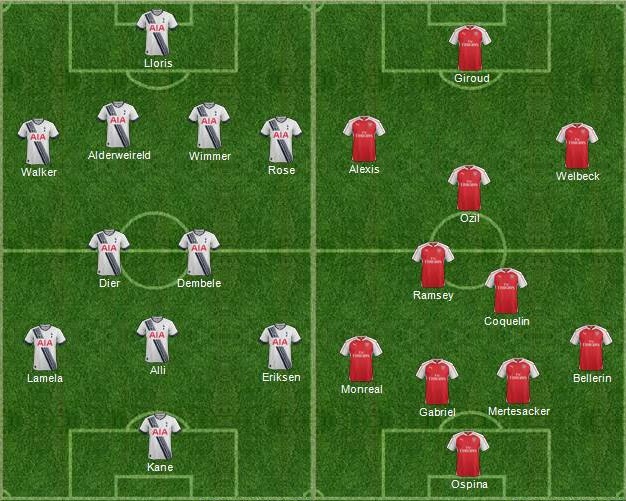 Predictions: looking at the current form of both teams, Spurs looks more likely to impose themselves on the game. Arsenal’s players has been criticized for lack of character and they need to be strong physically and mentally because Spurs will it a right go for full 90 minutes. I am going with a narrow 2-1 win for home side Tottenham in this one.