Arsenal are set to take on Watford in the premier league game on Saturday evening, 14th October 2017 at the Vicarage Road stadium. Arsenal who are looking fifth win of the season will be slightly favourite after registering couple of good back to back wins in the premier league. The game kicks off as the evening kickoff on Saturday with BT Sports broadcasting the match live in the UK. While US viewers can watch the game live on NBCSN.

Match Preview: Arsenal were genuine title contenders before the season started and after a difficult start to the season they are back in the title race albeit barely as they trail Chelsea by 8 points with 16 games to go. Not the ideal situation for the gunners who also resume their Champions League campaign in couple of weeks time. As the games come thick and fast in February Arsenal need to dispose off teams like Watford if they were to retain their place in premier league top 2.

Watford on the other hand made a superb start to the season but they are struggling for form heading into business end of the season. Couple of good wins can get them back in the top half of the season and well clear of relegation zone which is the priority for the club. 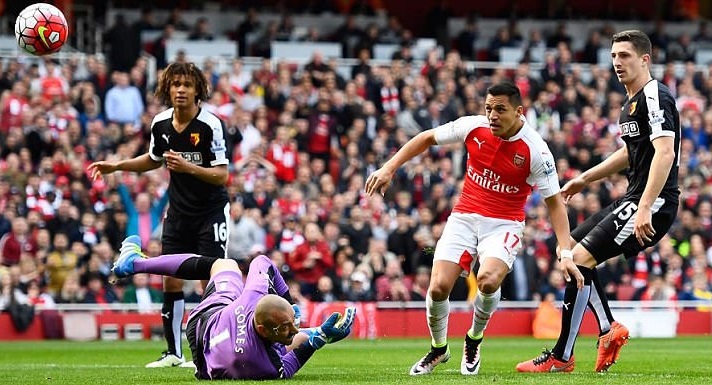 Last time these two meet was back in January 2017 when Arsenal stumble to a 2-1 defeat thanks to goals from Younes Kaboul and Troy Deeney. However Arsenal are in good form going into this weekend’s game and we can expect them to be a better preposition this time around

Team News & Lineups: Wenger will have to make a decision on whether to start with Petr Cech, who is doubtful for the game and his fitness will assessed before the match. Wilshere and Rosicky are both training with the squad after overcoming their long term injuries but saturdays game comes too early for them to play any part in competitive football. Flamini and Ramsey are set to miss this weeks game which means Arsenal are likely to start with Elneny and Coquelin in central midfield roles with Ozil, Sanchez and Welbeck playing in attacking roles behind Olivier Giroud.

Watford on the other hand have some injury concerns of their own with both Sebastian Prodl and Valon Behrami rated as doubtful for the Arsenal clash. This is how I expect both teams to lineup on Saturday afternoon. 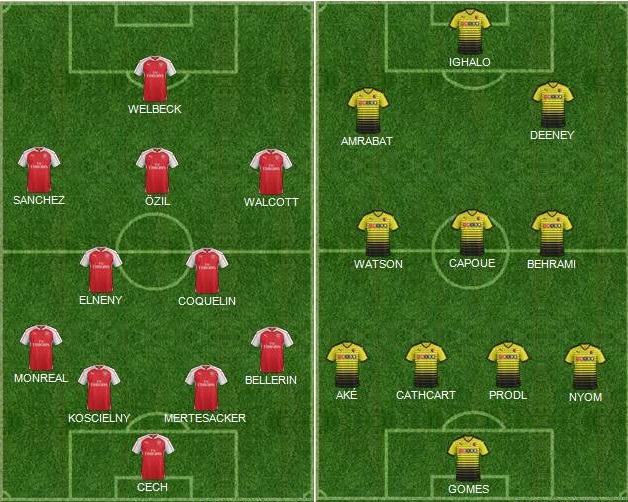 Match Predictions:  Arsenal always turn things around when they have their backs to the wall but they are at their most vulnerable when coming into a game in rich form. Watford match might prove a banana skin for Arsenal but most of the players will be fresh after international break and playing at home Arsenal has too much quality in their ranks to lose this game. I am going with a 2-1 win for Arsenal.

Arsenal consolidated their position in the top four with superb display of attacking football against Watford this Saturday afternoon. Gunners took early lead through Alexis Sanchez who fired home from close range to make it 1-0, Iwobi who was involved in the first goal got onto the scoresheet with a neat finish inside the box. Arsenal scored two more in second half to completed a big win. Gunners are now back in the title race and this weekend could prove crucial if Tottenham and Leicester drop points.