Arsenal took West Bromwich Albion in the premier league’s rare Thursday night game on 21st April 2016 at the Emirates Stadium and it was a massive game for Arsenal’s hopes of top 4 finish. Alexis Sanchez scored twice in first half to put Arsenal to a comfortable 2-0 lead as they pretty much cruised to win at the Emirates Stadium.

Arsenal kept their chances of finishing in top 3 in the league well within their own hands after a comfortable 2-0 win over West Bromwhich Albion on Thursday night. Sanchez was on the score-sheet twice in first half as Arsenal dominated the game throughout.

It was not long ago in the season When Arsenal were real bookies favourite to win the title but as usual their form took a nose dive around new years time and now they are fighting to actually finish in the top four. Their destiny is still in their own hands as far as top 4 finish is concerned but if they drop points against West Brom or Norwich next week they might very well forget about even the top four.

Team News & Lineups: Last time these two meet was back in November at The Hawthorns and it was baggies who took all three points with a 2-1 win as James Morrison and own goal by Arteta cancaled out Giroud’s opener. West Brom are not the best of travelers having only register four away wins but they can pose a real threat with Rondon and Berahino playing upfront.

Wenger is likely to hands starts for the likes of Mertasacker, Ramsey and Olivier Giroud with Walcott and Welbeck settling for place on the bench. Iwobi should continue alongside Sanchez and Ozil in attacking roles while Ramsey to play in central midfield alongside Coquelin. This is how I expect both teams to lineup on thursday night. 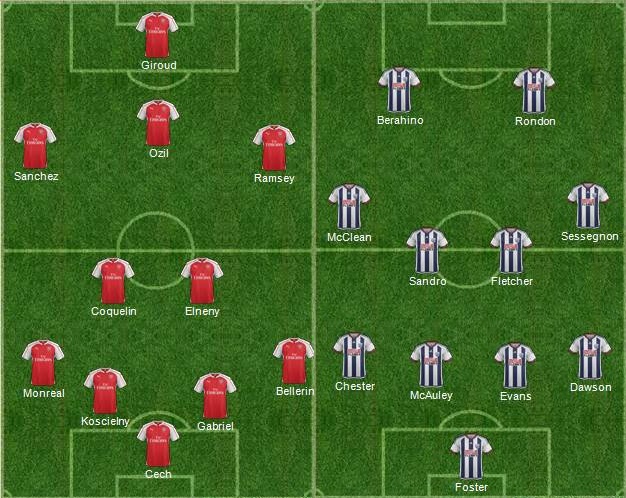 Match Predictions: Arsenal are the hardest team to predict on their day they will blitz past West Brom by 3-0 to event 4-0 scoreline but just when you think they are getting it all together they suffer embarrassing result here on there. inconsistency has been the biggest culprit as Arsenal are out of the title race but they can still end the season on high with some solid performances.