Denmark started the game stronger with Christian Eriksen scoring inside first 07 minutes of the game with a neat finish. However Aussies struck back before the half time with captain Mile Jedinak scoring from the penalty spot in the second game in a row. Both teams failed to score afterwards and share the spoils and taking the group right down to the wire.

Australia are set to take on Denmark in their second world cup game on Thursday, 21st June 2018 at the Samara Arena in Samara, Russia. Denmark won their opening game thanks to a solitary goal against Peru and they are in great position to book their place in knockout stages if they can get the better of Australia and France beat Peru later in the day. However and Australian win on thursday will open up this group and make things interesting going into the last match day of group sages.

Australia vs Denmark Preview: Aussies were mighty unlucky to not come away with atleast a point against France in their opening game. They would feel hard done by some of the decisions however that is history and their World Cup hopes hing on getting a win over very disciplined Denmark side who will be confident going into the match.

If Soccoros were unlucky, Denmark were lucky as they did not looked particularly good in their opening fixture against Peru which they went on to win 1-0 thanks to second half goal from Yussuf Poulsen however had Christian Cueva converted his penalty in first half and countless other chances throughout the game things would have been different. 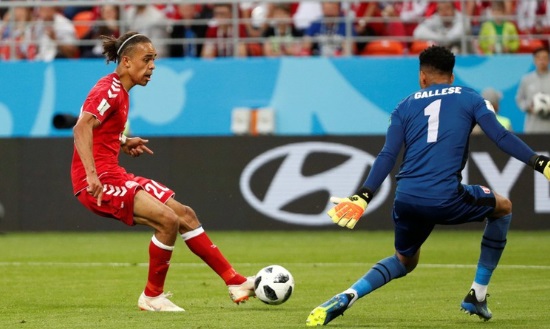 Yussuf Poulsen scored the only goal of the game in Denmark’s 1-0 win over Peru in their opening fixture. Denmark will have to raise their game by a few notches if they were to get the better of this very brave and resilient Aussie side on thursday afternoon.

Team News & Lineups: Australia are not expected to make many changes in the starting lineup and if there were any chance of a change it will be Tomi Juric slotting in for Andrew Nabbout who started upfront in their opening game. Denmark however do have some injury worries with Andreas Christensen and William Kvist both hobbled off against Peru and Christensen might play some part against Australia but its a bad news for William Kvist who won’t be taking part in the world cup anymore after suffering injury.

This is how I expect both teams to lineup on Thursday afternoon in Samara. 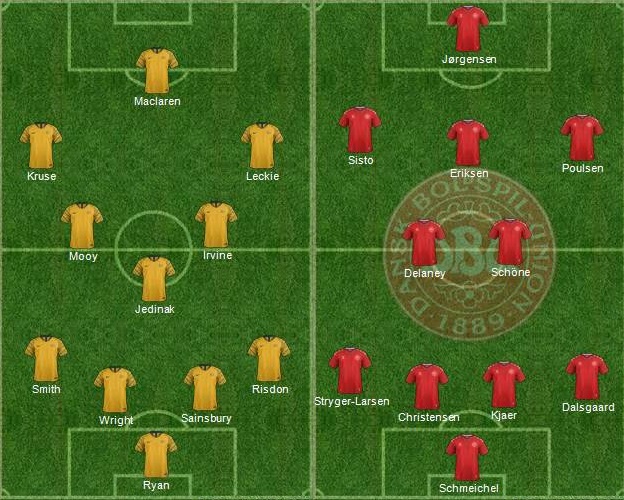 Match Predictions: Now Denmark played poorly and won while Australia looked good against France for most part but they ended up losing, thats the kind of world cup this has been so far. I think Denmark will improve and looked better equipped all round compared to Australia who have hard workers in the team but lack cutting edge. I am going with another 1-0 win for Denmark in this one.