Lionel Messi scored twice in the first leg of 2015 UEFA Champions League semifinal against German giants Bayern Munich while Neymar added the third in closing stages to make it a perfect win for Barcelona and kill off any chance Bayern had to comeback in the second leg which will be played in a weeks time.

Bayern Munich visited FC Barcelona for the first leg of the semifinal encounter in champions league and they were out done by pace and skill barca’s front three (Neymar, Messi and Suarez) posed throughout the game. Although Bayern held their own for best part of first 75 minutes but two magical goals from Lione Messi turned not only the match but tie in Barcelona favour. While another goal from Neymar at the end made it a cheery on top of already great result.

Just when it looked like Bayern Munich have done enough to take a 0-0 result back to Allianz Arena, the best player in the world Lionel Messi came up with the goods for home side as Bernat lost possession cheaply deep in his own half and Lionel Messi unleashed a superb shot from 20 yard to make it 1-0 for home side. 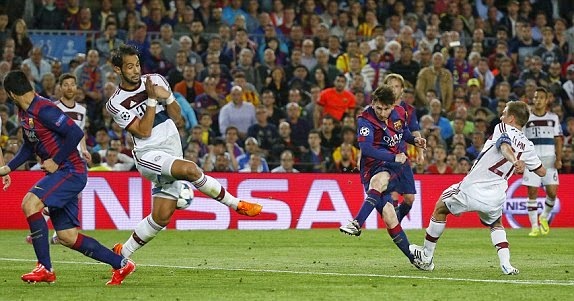 Lionel Messi scores his first of the night from 20-yard out after sloppy Bayern defending.

Minutes later Messi sealed the match with great goal when he bambozaled Boateng and left him for dead on the left flank before chipping one over Manuel Neuer. Absolute magical goal from Lionel Messi. 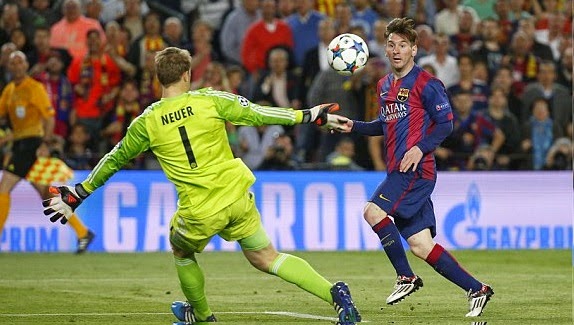 Messi scored superb second goal of the game with a magnificent chip over worlds best keeper in Manuel Neuer.

Bayern Munich commited bodies forward in hope to get all important away goal but they get caught on the break when Lionel Messi release Naymar behind Bayern defense who makes absolutely no mistake in making it 3-0 and thats game set and match as far as this tie is concerned.