Barcelona were too strong for Arsenal as they secured a 3-1 win at Camp Nou and completed 5-1 aggregate margin as they head to quarterfinals of this year’s UEFA Champions League. Neymar, Suarez and Messi were on target for the hosts in a comfortable 3-1 win. 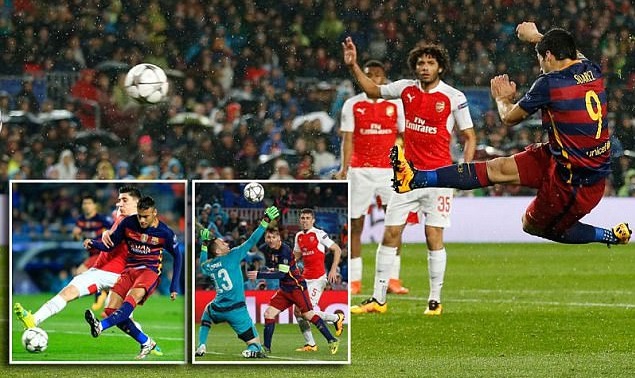 Arsenal needed to turn around two goals deficit having lost 2-0 at home, when they visited FC Barcelona at Camp Nou this Wednesday night. But Barcelona continue their magisterial form as they put Arsenal under massive pressure with their superior possesion and finally opened the scoring in 18th minute when Neymar scored from close range to make it 1-0 for Barcelona. Arsenal equalized just after the break when Mohamed Elneny scored with a superb strike to make it 1-1 but too little too late for Arsenal. Suarez and Messi scored late in second half to make it 3-1 for Barcelona.

Mohammad Elnany goal had given Arsenal a glimmer of a hope just after the break but Barcelona as they mostly do, responded back with a goal from Luis Suarez whos acrobatic shot found the back of the net to make it 2-1 and surely game over for Arsenal as far as Champions League is concerned this season.

Barcelona had enough time to add another when Lionel Messi scored 6th Champions League goal this season. Barcelona will now face one of the following 7 times in the quarterfinals (Atletico, Real Madrid, PSG, Wolfsburg, Benfica and Manchester City)

Neymar scored with a superb low lefted strike into the bottom corner to make it 1-0 for Barcelona and pretty much ended the contest as far as this round of 16 tie against Arsenal was concerned.

Barcelona are coming into this second leg encounter on the back of 37 games unbeaten run and with 2-0 lead from first leg they will be heavy favourite to not only make it through to the quarterfinals but also win again in the second leg. Having said Arsenal do have history of getting a decent away win after throwing the tie away in home legs. Last year they lost against Bayern Munich at home but won at Allianz arena, the result they repeated again in group stages winning away in Munich.

Neymar, Messi and Suarez are all fit and will start at emirates on tuesday night making Arsenal’s night even more difficult. One would imagine Arsenal must win the home leg to have any chance to upsetting Barcelona over the two legs and on paper Arsenal do have enough qualify in their squad to get a decent result in first leg. Lets take a look at the team news.

Team News & Lineups: Alexis Sanchez and Hector Bellerin will get straight into starting lineup after missing the weekend FA Cup clash against Hull City, While Mesut Ozil has recovered from minor illness and should start alongside Giroud, Ramsey and Coquelin. Arsenal will have the back four of Mertesacker, Koscielny, Bellerin and Monreal while Petr Cech to play in goal.

Barcelona are all set to start with Messi, Neymar and Suarez upfront with Rakitic, Iniesta and Busquest playing in central midfield roles. Dani Alves and Jordi Alba to play in full back roles alongside Pique and Mascherano in central defense. This is how I expect both teams to lineup on Tuesday night.

Predictions: Barcelona were odds on favourite before the tie and odds has gone a notch up after the first leg result where Barcelona won 2-0 at the Emirates. I expect Arsenal to put a up a decent fight and might get a result but Barcelona to go through on away goals.